Sooners Moving On From Bye Weeks, Ready To Establish Rhythm OU Run Defense Has To Step Up Against Texas 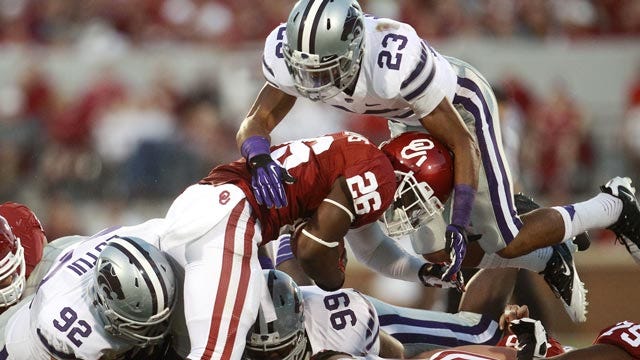 The college football season is six weeks old, and for the most part, teams have played every single week, or five weeks if they've had a bye week.

The Oklahoma Sooners find themselves with just four games under their belt in the second week of October. In fact, throw in the Sooners' 9:30 p.m. CST kickoff in the first game of the season against UTEP, and you could argue OU has had the strangest schedule in all of college football so far.

OU head coach Bob Stoops said Monday the odd schedule has prevented the Sooners from establishing any sort of week-to-week rhythm. However, last Saturday's game against Texas Tech was the first of nine consecutive games for the Sooners.

"We've had two bye weeks, everyone knows, in the last three weeks and everyone else has played five and six games," Stoops said. "That's just how it's happened. Everyone knows how the schedule ended up and we did the best we could."

Stoops said game action is the most important factor for improvement, and the Sooners' lack of it was a hardship for the players to showcase the strides they had made during practice.

"You really make your improvement when you're on the field playing in game situations," Stoops said. "It's hard to make improvements if you aren't playing games. I think games are where you take the steps and learn the most."

The Sooners had a combined four weeks of practice for their past two games. Stoops said the coaching staff didn't drastically change the preparation schedule, but did the best they could with all that extra time.

"We go through the week, much like a game week," Stoops said of the bye week schedule. "Monday and Thursday there's more time in the film room, less time on the field. Tuesday, Wednesday are heavy work days and we went certain team sessions against each other. Thursday we went the entire team period, 60-70 plays, against each other."

The players have been frustrated with the schedule as well, saying the main difficulty was not being able to have a good indication of how much more improvement was needed for the team to be great.

"You feel like every Saturday you either are getting better or you're not," wide receiver Kenny Stills said. "Then we're not getting our chances to show we're improving by having those bye weeks. It definitely felt like it slowed us a little bit but we've got a long schedule ahead of us now, so hopefully we can get better each Saturday."

Stills added having a game every week helps his focus in a very big way.

"It's just exciting to be able to celebrate our win on Saturday and then be able to get focused again and have another team on our schedule for the next week," Stills said. "It helps me move on to the next game a lot faster. It's a lot better than having to sit out a week and know that we don't have a game. It's not as fun."

The bye weeks certainly made things difficult for the Sooners, but quarterback Landry Jones said that didn't give OU room to make excuses for the way they played, particularly against Kansas State.

Fortunately for OU, the Sooners are through with the bye weeks for this season, and won't get a break until the end of the regular season.

Despite the now grueling stretch of nine consecutives weeks with a game through the rugged Big 12 conference, Stoops said the expectations for his team have not changed in the slightest.

"I just expect them to continue to work hard in practice and in their preparation," Stoops said. "Hopefully, as we start playing week to week, we can continue to take steps and make improvements on the field."