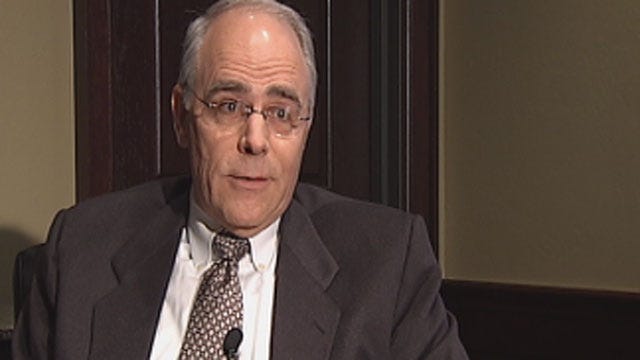 The head of the Oklahoma City Community Foundation agrees to sit down with News 9 and discuss the upcoming audit and clear up if trustees are paid.

The foundation and the Oklahoma City Disaster Fund has come under fire recently after allegations were made by victims of the Murrah bombing that they were being denied money from the donation fund.

That fund still has about $10 million in it.

Steven Davis, the Chairman of the Oklahoma City Community Foundation, said he would discuss the upcoming audit and clear up if trustees are paid. But he and the organization's spokesperson were adamant about not addressing any of the other recent allegations.

When asked if he was going to talk about any of the other issues, such as the allegations made by the bombing victims and the money paid for salaries, Davis said he didn't want to address any of that.

"I understand I am here to correct the blatant mis-statement," Davis said.

Davis was referring to the head of the Better Business Bureau who told News 9 it appeared from the Disaster Fund's tax form that trustees are paid. Davis said they are not.

"They have served solely out of their desire to help the victims here," Davis said.

Tax records show Nancy Anthony, who is the president of the OCCF, does receive a yearly salary of $232,000.

"I believe she is a trustee of that fund," said Davis. "She is not paid in conjunction with that fund, she is paid out of the overall fund."

Davis and the foundation have agreed to an independent audit to address questions raised by victims and donors about the way the fund has been handled.

"We have a chance to clear our name from allegations that frankly are unfair but we can't fully respond to because it involves a lot of these people's private information," Davis said.

Davis, however, said he doesn't know yet the scope of the audit and if it will address such things as staff salaries, how much money was spent, and allegations of poor treatment of bombing victims.

"It's guesswork at this point, because I'm not the auditor and I don't know," Davis said.

A spokesperson for the fund told us they would not address any of these concerns until after the audit. Davis said he doesn't know how long the audit will take, and at this point they haven't hired an auditor.