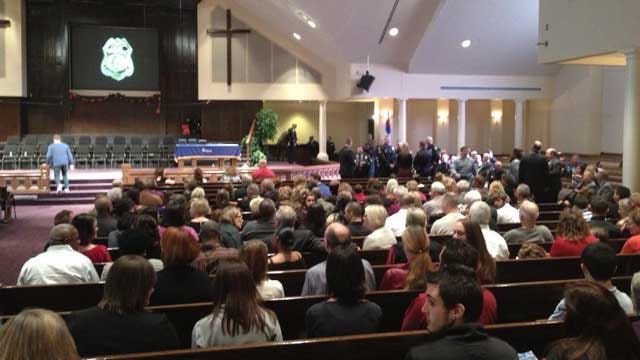 More than three dozen new Oklahoma City police officers will hit the streets in the coming days. The group just received their badges at their graduation ceremony on Thursday.

These new officers will be facing a number of challenges, including a short staffed police department, a rise in violent crime, and one of the highest homicide rates the city has seen in nearly 30 years.

The 11 women and 27 men who make up the 129th recruit class of the Oklahoma City Police Department knew what they were getting into when they entered the academy. But this class shares a special bond, since they lost one of their own during their training.

The ceremony on Thursday was a time of celebration, reflection and remembrance. Thirty-eight men and women, who have given their vow to put their life on the line, accept the ultimate responsibility when accepting their badge to protect and serve Oklahoma City.

Also honored was recruit Kelley Chase, who died after hitting his head during a training exercise and who received a standing ovation. His wife was there to accept his badge.

The 129th class of the OKCPD faces numerous challenges, including a decrease in the number of officers on the street, and a rise in population, street crime and violent crime. Despite that, these men and women accepted their commission with pride and reverence.

Despite that pride, the FOP President said some of these new officers may decide to quit in the weeks and months ahead. But they are already planning for their next recruit class this January, which is said to have more than 50 recruits already signed up.

The police chief says ideally they would like to add more than 200 more police officers onto the streets to deal with violent crime.

Right now, Oklahoma City has had a total of 93 homicides, and the year is not out yet. The highest recorded number is 102, homicides which happened back in 1979.