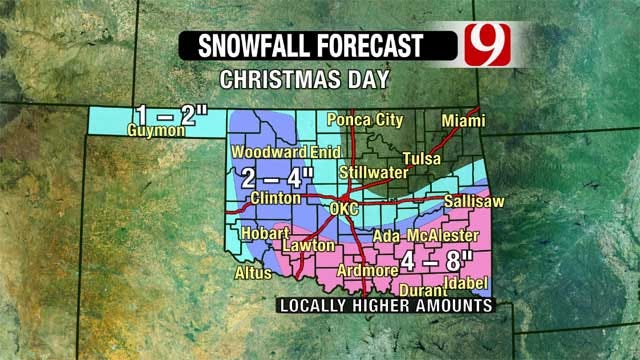 OKLAHOMA CITY -- The winter storm has transitioned from sleet to snow across most of Oklahoma, dumping snow across the state and leading to a blizzard warning in the southwestern part of Oklahoma.

The mix of rain and sleet lasted for most of the morning in Oklahoma City, but snow began falling in the metro around 10 a.m. About  1 to 2 inches of snow is expected to accumulate in central Oklahoma.

Western, southern and southeastern are expected to see the most snow. Weatherford and surrounding areas could receive 2 to 4 inches, while cities in the southeastern part of the state could see up to 8 inches of snow.

The News 9 Weather Team says there will be blizzard conditions along Interstate 40, Interstate 44 and Interstate 35 in the west, southwest and south. Strong north winds will be blowing snow across roadways, making it very difficult for drivers to see.

Roads are expected to stay slick and dangerous throughout the day. Drivers are urged to take their time while traveling. There have been hundreds of accidents across the state due to the bad weather and treacherous driving conditions.