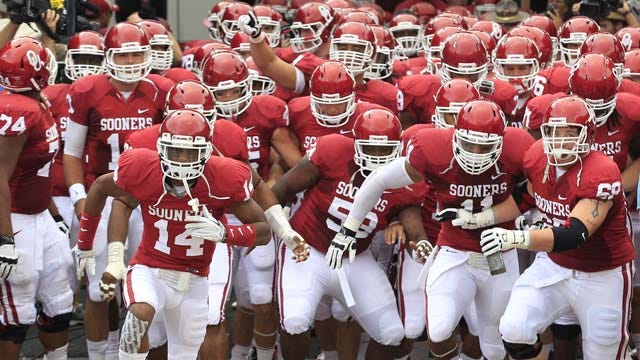 National Signing Day didn't come with the usual buzz for the Oklahoma Sooners this year. Despite not having a class loaded with four- and five-star recruits, the Sooners were able to meet a lot of needs and, more importantly, snag several players who were genuinely excited about the opportunity to play in Norman.

Barnett was a two-star recruit by Rivals.com. With Tress Way graduated, Barnett becomes the likely replacement at punter for the Sooners. Barnett isn't the best punter in the world, but he was excited about becoming a Sooner, and that counts for a lot more than you'd think.

Cavil is a three-star and No. 35 WR by ESPN and a 3-star and No. 121 WR by Scout.com. Cavil is a huge wide receiver and has good enough speed to be a consistent vertical threat for the Sooners. If he bulked up considerably, he could possibly shift to tight end, given the Sooners' lack of depth at the position. Even though the Sooners are loaded at wide receiver, Cavil's size should help him to squeeze into the rotation at some point.

A three-star recruit by Rivals.com, Russell should be able to come in and start right away for the Sooners with three senior defensive tackles from 2012 graduating. Russell has great size for a tackle and has good speed as well. The only problem is that he won't be on campus for spring practice due to some class problems at junior college. He'll be in Norman for the summer, but it would have been nice to have him in the spring.

Thomas was a three-star recruit by all three major services. Like Hatari Byrd, Thomas will have the opportunity to start immediately for the Sooners at safety. He's got the physical tools--well-built with good height and length. He reads things very well and has great instincts.

Ward was a four-star recruit and ranked in the top 15 among defensive ends by all three services. Ward has had a tumultuous past year without playing his senior season. He's already on campus, so he'll be participating in spring practice and getting a jump-start on the 2013 season. He's got a lot of physical tools and has solid speed for a defensive end. Like others before him, filling out his frame would make a big impact.

A three-star recruit, Okoronkwo has a great combination of strength and quickness, but needs to add a lot of bulk to be a college level defensive end. That shouldn't be a problem, with OU strength and conditioning coach Jerry Schmidt. Okoronkwo was originally an OSU commit.

Ford is easily the crown jewel of the OU recruiting class, ranked as a top 10 running back across the board. He's a tough, powerful runner with good speed. One of the most college-ready backs in this class, Ford has drawn comparisons to Trent Richardson without the big numbers in high school.

Daimler isn't the overpowering offensive tackle you see on SEC rosters, but he could develop into that. He could add some more weight to his 6'6 frame and become a truly dominant player. The best thing about Daimler is that he's a very efficient run blocker, something the Sooners desperately need on the offensive line.

Bennett is a solid receiver who could fit nicely in OU's offense as a slot receiver. However, he also has a lot of experience on defense, so it will be interesting to see how OU uses him. Chances are he'll be on offense, though, due to his quickness and speed. However, he'll definitely need to add some weight to his wiry frame.

Another defensive tackle the Sooners added late in the game, Romar is a 'tweener' and has the size to play both end and tackle. However, given the Sooners' lack of depth at tackle, he'll definitely fit in at tackle. He'll need to add bulk, but that's a common trend for most of these players.

Walker is a physical guy with good size. He's got some developing to do at the defensive tackle position, but he should be able to turn into a solid player for the Sooners. What's even better is that he's another guy who is genuinely excited about being in Norman.

Taylor is one of OU's oldest commits and has the ability to play receiver or cornerback, but based on his skill set, he'll be best suited at cornerback. He's got great reach and is very lanky. He really needs to spend time in the weight room to bulk up his frame.

Alexander has quality size and good speed. He'll be able to add weight at OU and be a strong, physical linebacker or possibly a safety. He's listed as an athlete, but he's been recruited by OU to play linebacker, and with his speed, he should turn out to be a great asset at the position. Again, with more weight, he should be able to be solid.

St. John has a great frame for a tackle and even has room to grow into it a bit more with some time in the weight room. His reach is solid for a tackle prospect and he's a decent run blocker.

Savage is a monster on the interior of the line. Think Phil Loadholt size, only at guard instead of tackle. As with any lineman of that size, he needs to work on pad level and flexibility, but having a huge body on the inside of the offensive line would be a huge plus for the OU running game. Savage was originally a Baylor commitment.

Thomas has fantastic size and is one of the best pro-style passers in this class. He has a cannon for an arm and has great running ability. With OU's depth at quarterback, Thomas, also a standout baseball player, is definitely a great option for the Sooners' future at quarterback.

Dimon has great potential as a standout defensive end for the Sooners. He has great speed and with more weight on his frame, could be another David King, able to play both defensive end and tackle.

Byrd is a true safety with great speed and physicality. He has great size and is a good cover safety. With Javon Harris and Tony Jefferson leaving, Byrd will have a chance to come in and start immediately.

Evans is an interesting player because he doesn't have a true position. He played on both sides of the ball at Norman North as well as returned punts and kickoffs. Chances are he'll end up on defense at linebacker. He's got great speed and size, with a frame that can add some major bulk to be a quality-sized linebacker.

Huggins flipped his commitment from Texas A&M to Oklahoma not long after Justin Manning, long thought a lock for OU, committed to the Aggies. He's got good size already for a defensive tackle, and has room to get bigger. Any defensive tackle is a good pick up for the Sooners.

Young is another great prospect as a slot receiver that has really flown under the radar for much of the recruiting period. He's a wiry receiver, but has decent height and should turn out to be a solid player.

Austin isn't rated very highly by anyone (2-stars by Rivals, 3-stars by Scout), but some of his fellow OU commits having been raving about his abilities on Twitter. He's a bit small, but with a bit more bulk, he'd be a solid cornerback. He runs a 4.5, so he has good speed to keep up with the Big 12 receivers.

Moore was a hot target for the Sooners before the 2012 season began, but the interest seemed to taper off before being rekindled in the past few months. He can play both safety and cornerback, but will most likely be a cornerback thanks to his size and athleticism.