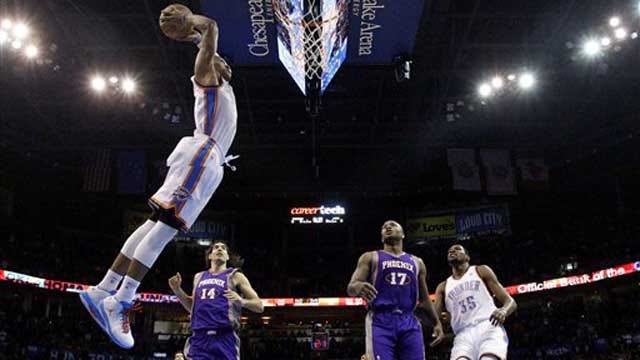 Oklahoma City's Russell Westbrook was named Western Conference Player of the Week by the NBA for games played Monday, Feb. 4 through Sunday Feb. 10.

Westbrook guided the Thunder to a 4-0 week, which included wins over the Dallas Mavericks, Golden State Warriors and Phoenix Suns (twice). He averaged 21.8 points, 6.0 assists, 3.3 steals and 3.0 rebounds. Oklahoma City won each game by 20 or more points as it improved to 39-12 (.765). The Thunder trails the San Antonio Spurs by ½ game for the top record in the league.

Oklahoma City's Kevin Durant was also a nominee for the week's Conference Player of the Week.

Here's a recap of the week for Westbrook:

Feb. 4 vs. Dallas: Posted 24 points, seven assists, three rebounds and three steals during a 112-91 win over the Mavericks.

Feb. 6 vs. Golden State: Tallied 22 points, five assists, four steals and three rebounds in a 119-98 win over the Warriors.