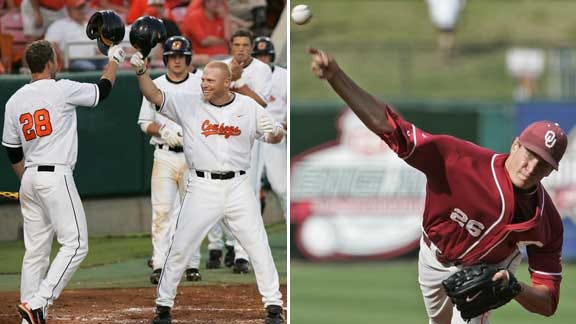 Oklahoma, Oklahoma State and Oral Roberts were all winners on the diamond on Sunday. Here are the recaps:

CORPUS CHRISTI, Texas -- Senior infielder Jack Mayfield crushed a three-run home run over the left field wall in the bottom of the eighth inning to push the No. 14 Oklahoma baseball team to its ninth straight win to open the 2013 season.

The Sooners courtesy of a 10-8 come-from-behind victory over New Mexico in the third game of the 2013 Kleberg Bank College Classic for both squads Sunday at Whataburger Field, the home of the Houston Astros' Double-A affiliate, the Corpus Christi Hooks.

OU pounded out a season-high 14 hits as a team. Infielder Matt Oberste, the reigning Big 12 Player of the Week, put together another big game, going 3-for-4 with his third home run of the season on a three-run blast in the first inning. Freshman outfielder Craig Aikin, senior outfielder/infielder Max White, freshman infielder Kolbey Carpenter and junior infielder Hector Lorenzana joined Mayfield and Oberste in posting multi-hit efforts against the Lobos.

After New Mexico landed the first punch of the game on a two-out solo home run by junior infielder DJ Peterson in the top of the first, the Sooners struck back by putting up a five spot in the home half. Aikin got things started by reaching on an infield single, then advanced to second on an error by New Mexico junior first baseman Alex Real that allowed Mayfield to reach.White then reached on a throwing error by New Mexico senior right-handed starting pitcher Sam Wolff, allowing Aikin to score and tie the game. That set the table for Oberste, who crushed a three-run round tripper over the left field wall to put the Sooners in front. Freshman outfielder Hunter Haley coaxed a one-out walk and scored one out later on a single through the left side by Lorenzana to make it 5-1.

After the squads traded two scoreless innings, the Lobos responded by plating seven runs over the ensuing four frames to take an 8-5 lead.

The Sooners began their rally in the seventh when Mayfield sent a leadoff single into left. White drove him home with a double to left center. After moving to third on a ground out by Oberste, White tagged up and scored on a sacrifice fly to center by senior infielder Garrett Carey to cut New Mexico's lead to one.

Oklahoma then used some two-out lightning to jump back in front in the eighth. Lorenzana doubled down the left field line, then advanced to third on a wild pitch. Aikin followed by coaxing a walk to put runners on the corners and set the table for Mayfield's go-ahead home run.

OU completed the comeback in the top of the ninth as Garza, Jr. retired the side to seal the win.

Oklahoma welcomes Pepperdine next weekend for a three-game set.

STILLWATER, Okla. – Oklahoma State won its fifth-straight game Sunday by completing a series sweep of the New Jersey Institute of Technology with a 5-2 win at Allie P. Reynolds Stadium.

Brendan McCurry's two-run home run in the bottom of the sixth inning snapped a 2-2 tie, and Randy McCurry notched his first save of the season by keeping the Highlanders off the scoreboard over the final three innings as the Cowboys improved to 7-1 on the season.

OSU took an early lead in the second inning off NJIT starter Mark Leiter, Jr. (0-2). After a double by Robbie Rea put runners on second and third, Gage Green delivered an RBI groundout to put the Cowboys up 1-0.

The Pokes doubled their lead in the fourth when Zach Fish, who led off the inning with a single, scored on a passed ball.

In his first-career appearance for the Cowboys, Tyler Nurdin worked four innings and held the Highlanders scoreless on four hits while striking out five.

But with a recent injury limiting Nurdin's pitch count, OSU went to the bullpen in the fifth and called on Kenton Bevacqua. After retiring the first batter he faced, the senior southpaw surrendered consecutive singles. Jon Perrin came on in relief and quickly recorded the second out, but a two-RBI double by Jake Stern tied the score before the Cowboys could get out of the inning.

That score held until the sixth. Rea led off the inning with a double, and after a sacrifice bunt, Brendan McCurry stepped to the plate and blasted his first-career home run over the wall in left field to give the Cowboys a 4-2 advantage.

The Cowboys added an insurance run on an RBI walk by Jarrett Higgins in the seventh, which was more than enough for Randy McCurry.

In picking up his 12th-career save, which ranks fourth on OSU's all-time list, Randy McCurry held NJIT without a hit over the final three innings while recording three strikeouts.

OSU finished the contest with 10 hits, three of those by Rea, whose 3-for-3 day raised his batting average over the .400 mark.

OSU is scheduled to return to action Tuesday when the Cowboys host Arkansas-Little Rock at 4 p.m. at Reynolds Stadium.

RUSTON, La. - Graham McIntyre leads the Oral Roberts baseball team to victory in the last match of a three-game set at Louisiana Tech on Sunday afternoon, as the Golden Eagles rolled to victory 9-3.

McIntyre finished his career afternoon with three hits, including a double, three runs batted in and a run scored. Brandon Healy came off the bench and added two RBI's on a late game single.

In the top of the fifth, with the Golden Eagles down 1-0 after a LaTech run in the third inning, McIntyre picked up his double with one out that scored Tyler Boss and Chris Williams. Boss drew a walk to lead off the inning, moving to third on a double to the left-center field wall from Williams.

Two batters later, McIntyre cleared the bases with his double down the left field line, just out of reach of the diving first baseman.

The scoring wasn't over in the inning for ORU, as Logan Domenico reached on a misplayed ball by the LaTech second baseman, allowing McIntyre to move over to third.

ORU then called for a squeeze with Kevin Cho at the plate. The bunt was well placed, and McIntyre beat the throw home from the LaTech pitcher to put the Golden Eagles up 3-0. The final run of the inning came as Matt Brandy singled to center, scoring Domenico from second. Cho was eventually caught in a rundown to end the inning.

LaTech picked up its second run of the game in the bottom of the sixth. Ryan Gebhardt singled to lead the inning off, eventually coming around to score on a single by Taylor Terrasas.

In the top of the eighth, with Brandy on third, Williams at second and Brandon Healy standing on first, McIntryre stuck again, singling to left field to score Brandy and Williams.

Following an easy bottom of the eighth for Guillermo Trujillo, who came on in relief in the sixth and pitched three full innings with two hits and an earned run, the Golden Eagles tacked on three more runs in the top of the ninth.

With one out, Trevino was hit by a pitch, moved to second on an error by the third baseman that allowed Nate Goro to reach. With Boss at the plate, Goro stole second just before Boss was plunked by a pitch to load the bases.

After Williams drew a bases loaded walk to push in Trevino, Healy singled up the middle, scoring both Goro and Boss, extending the Golden Eagle lead to 9-2.

The Bulldogs added one more run in the bottom of the ninth as Jacob Derouen drove in Taylor Love. Love reached to lead the inning off after Alec Smith struck him out, but the pitch was wild, allowing Love to reach.

Tim Zufall got the start on the mound, picking up his second win of the season, throwing five innings, one hit and one run, which was unearned. Smith allowed a hit and a run in two-thirds of ninth and Jeff Gunter allowed a hit and picked up the final out of the ball game.

The Golden Eagles rattled off eight hits in the contest, including the doubles off the bat of McIntyre and Williams. Domenico, Trevino and Joey Migliaccio added singles in the game.

The series win was head coach Ryan Folmar's first as a head coach.