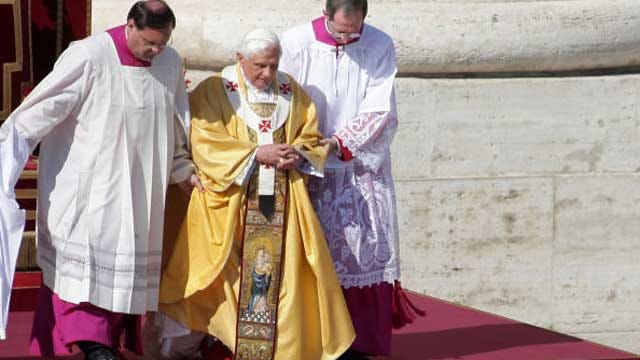 Pope Benedict XVI had a final, quiet day as pontiff, meeting with his cardinals before flying off into retirement.

Benedict briefly addressed 144 cardinals gathered in the Clementine Hall of the Apostolic Palace, thanking them again for their support and saying that in the turnout for his final general audience the previous day, "we saw the spirit of Christ... The Church will rise again and be full of souls, the Church will grow."

During his remarks, he pledged his "unconditional reverence and obedience" to the man who becomes his successor.

He then gave a blessing, and personally greeted each of the cardinals in attendance, shaking their hands and exchanging a few words as they approached him in turn.

Shortly before 5 p.m. (10 a.m. Central), Benedict left the palace for the last time as pope, driven the short distance to the helipad on the top of the hill in the Vatican gardens and fly by helicopter to the papal retreat at Castel Gandolfo south of Rome.