Five Things To Watch During The Oklahoma Sooners' Spring Practice 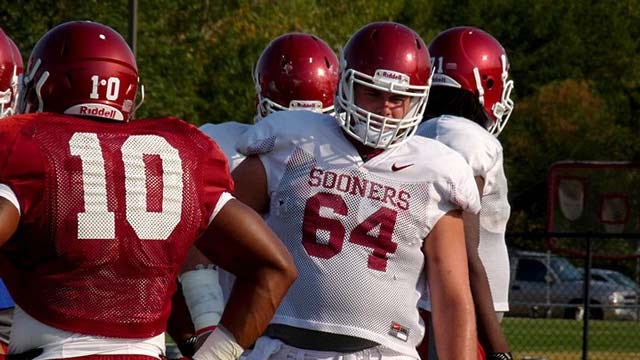 The Oklahoma Sooners begin spring practice on Saturday with hopes of improving upon a good, but not great 10-3 season in 2012. Unlike past seasons, there are a lot of questions surrounding the Sooners, staring with the quarterback position. Here are five things to watch for the Sooners in spring practice.

Oklahoma's first battle for a starting quarterback since 2007 is easily the headline of spring practice this year. Whoever grabs the starting position will be quite a change from stoic pocket passer Landry Jones, who left OU after 50 games as the Sooners quarterback. The leading candidate is junior Blake Bell, better known for his bulldozing running ability than his arm, but he does have a very big arm to go along with his tough running style. Bell didn't have many opportunities to throw the football the past two years, but he'll get plenty of opportunities in spring practice. While it appears the job is Bell's to lose, redshirt freshman Trevor Knight and Kendal Thompson can't be completely counted out of the picture, especially Knight. Teammates and coaches raved all season about his abilities leading the scout team for the Sooners in 2012.

Gone are James Patton, Bruce Kittle and Jackie Shipp. In are Jerry Montgomery, Bill Bedenbaugh and Jay Boulware. The common mindset around Norman was Bob Stoops was too loyal to fire assistants, but that idea was flipped on its head in the weeks following National Signing Day. Now, Stoops has brought in and influx of youth and excitement on the coaching staff, something it has needed for some time. All three of the new hires are known for their recruiting prowess—particularly Bedenbaugh and Montgomery—something else the Sooners desperately needed. It will be interesting to see how the Sooners respond to the changes in the coaching staff but it seems these moves will be a big help for OU going forward.

It was rumored earlier in the offseason that OU would be switching to a 3-4 alignment, given the lack of standout defensive tackles and plentiful supply of linebackers. However, no one on staff had much, if any, experience coaching in a 3-4 defense. Despite that, Mike Stoops has said that a 3-4 alignment will definitely be a part of OU's overall defensive scheme next season. The reported move of defensive end Michael Onoahu to outside linebacker certainly supports Stoops' statement made last month.

This was easily the weakest unit on the team last season and it's up to new coach Jerry Montgomery to whip the group into shape. That may prove difficult in spring practice, where the Sooners will roll out just three defensive tackles thanks to the dismissals of Damon Williams and Marquis Anderson, as well as the failure of Quincy Russell to make it on campus in time for spring practice. The only good thing is that Torrea Peterson, Jordan Phillips and Jordan Wade will get plenty of reps and the inside track at starting in the fall. The Sooners have three more defensive tackles coming in the summer, but that won't help in the spring. Oklahoma has plenty of defensive ends to go around, and that group should be a solid unit with some improvement from a year ago.

The Sooners just lose tackle Lane Johnson off the offensive line this year, but he's the only offensive lineman the Sooners lose on the entire depth chart. After a year with a plethora of injuries, there are plenty of candidates battling for starting positions. Gabe Ikard, Bronson Irwin, Tyrus Thompson, Adam Shead and Daryl Williams all started games for the Sooners last season, but will definitely be challenged by several players, including Tyler Evans, who was the starting right guard in 2012 before suffering an ACL injury in summer practice before the season. Throw in junior college transfers Josiah St. John and Dionte Savage who will arrive in the summer and you're looking at a stacked offensive line.

Five Things To Watch During The Oklahoma Sooners' Spring Practice