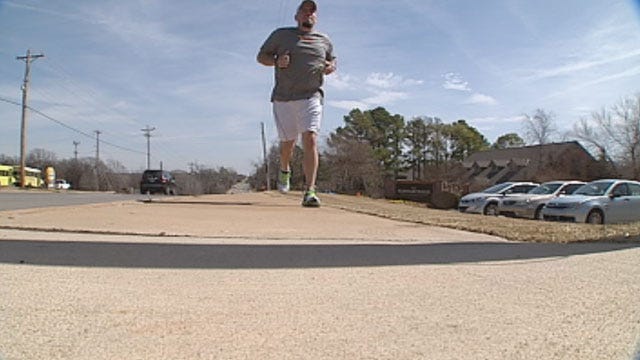 "I've been getting up every morning at 4 a.m. and walking for two hours," Cuthbertson said. "And then in the evening, I walk another five miles. And on days it's sunny, my kids come out too."

Cuthbertson is the kids and family pastor at Spring Creek Assembly of God in Edmond. He is taking on a huge fundraising effort by running 1,000 miles in 100 days.

Cuthbertson is running to raise $12,000 for Happy Horizons Children's Ranch in the Philippines. It's a safe house for victims of sex trafficking and abandoned children. Cuthbertson says the money he is pledging to donate will run their program's school for an entire year.

"We can't ignore what's going on with human trafficking. It's disgusting. It's a plague," Cuthbertson said. "I mean, we've got to do something. I might [not be able to] go to the Philippines to do anything, but I can do something here."

Dozens of people have sponsored miles for Cuthbertson from big corporations all the way to his dentist. But his biggest supporters are his family who often walk with him.

"I ran the whole way, and I beat him," said Ayla Cuthbertson, Cuthbertson's 5-year-old daughter.

Fighting through soreness, ached and shin splints, Cuthbertson keeps pressing toward his mark.

"It's those moments that you're walking, and you are kind of doubting, $12,000 is a lot of money to try to raise," he said. "But I know if I'm obedient, God will come through on this."

If you would like to support Cuthbertson's cause, you can contact him at his church Spring Creek Assembly of God at 405-341-5200or 1600 SE 15th Street Edmond, OK 73013 or by email at tlcuthbertson@gmail.com