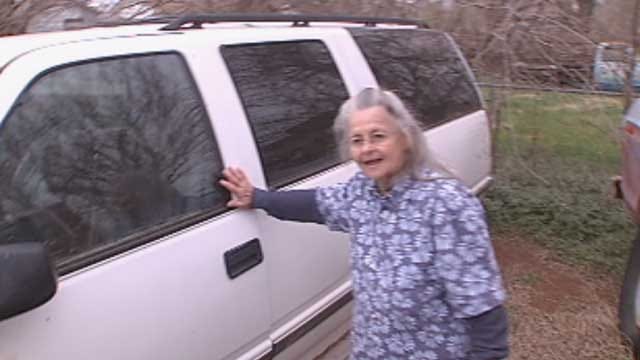 A 70-year-old woman is bitten by a neighbor's aggressive pit bull as it was attacking her cat. It happened Wednesday, but, she says animal control just contacted her Friday morning.

The Animal Welfare Department says it simply didn't have anyone available to service the call when it happened. Police don't normally respond to animal related calls, and with just 15 officers, animal control is struggling to cover all of Oklahoma City.

Shultz says she's called animal control about an aggressive pit bull in her neighborhood twice before being bitten by the dog Wednesday afternoon. She says she was trying to save one of her cats being attacked, and even crawled on her stomach under an SUV in her driveway to try and pry her cat loose from the pit!

“I have two puncture marks at the top, and two at the bottom,” said Shultz. “It wasn't what it could have been, what a real pit bite could have been.”

But she says, the injuries were bad enough, and her cat eventually died.

“I was shaking, so I called 911. I said I want a policeman out here now, and they said no, we’re going to transfer you to animal control dispatch,” said Shultz.

Shultz says the dog had just come to live with her neighbor across the street a couple of weeks ago.

“There is a high number of pit bulls that we deal with on a day in, and day out basis,” said Sheridan Lowery, Animal Welfare Supervisor.

On an average day, Lowery says his officers start out with up to 300 calls. The bulk of those calls he says are about aggressive dogs.

“Some of our job is to educate by either talking, or by maybe issuing a citation, or impoundment, or all three,” said Lowery. “It’s various things that we have to deal with.”

“It should have been somebody the same day,” said Shultz.

The Animal Welfare Department says even though it’s slated to have 15 officers working the metro, two of those officers are full time investigators, and there are currently two vacancies.