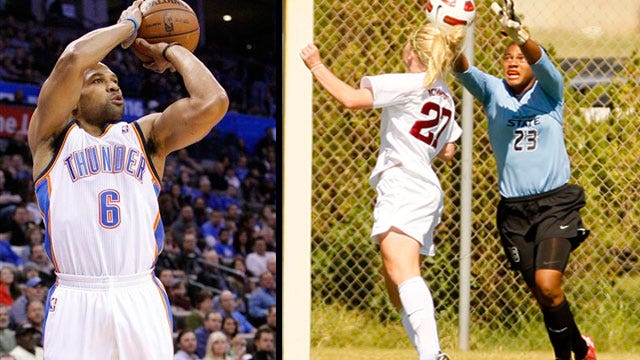 Oklahoma City put together a modest 2-1 record last week to improve to 54-20 on the season. With eight games remaining, the Thunder needs six wins to reach 60 for just the fourth time in franchise history (including Seattle) and first time since arriving in OKC.

In other news, Kevin Durant's really good. In fact, Durant's 28.3 points per game is currently edging Carmelo Anthony's 27.9, and if that holds up over the final eight games, Durant will win his fourth consecutive scoring title. How rare is that? Only Wilt Chamberlain and Michael Jordan have ever done it.

Oklahoma State's three-time All-American goalkeeper just took her career to another level. Franch has been named to the United States Women's National Team roster for a pair of matches this month. She'll be one of three goalkeepers on the 23-player roster that will travel to Germany and the Netherlands for friendly matches in preparation for this summer's European Women's Championship. To borrow a baseball phrase, welcome to the show, kid.

These girls could be on this list every week, but are sometimes omitted for the sake of variety. Oklahoma's 16-1 road smashing of Wichita State improved the Sooners to 30-2 on the season. OU received all 31 first-place votes in this week's USA Today poll, making them the undisputed top team in the land.  As the Sooners enter the heart of Big 12 play, it would be hard to imagine this train slowing down.

To be clear, both the men's and women's teams made the NCAA Tournament, and the women danced their way to the Sweet 16, so nobody has anything to be ashamed of here. With that said, both teams left March Madness knowing an opportunity had been left on the table. The men knew if they could overcome San Diego State, that No. 2 seed Georgetown would be waiting. The women knew if they could take down the Lady Vols, Brittney Griner and Baylor would be standing in their path. So in both cases, the end was near, right?

Then Florida Gulf Coast and Louisville happened. The Eagles took down Georgetown in epic fashion, while the Cardinals combined 16 3-pointers with some generous calls down the stretch to shock the world. So instead of facing two top seeds with superior athletes, the Sooners could have faced two huge underdogs. Don't get me wrong, the Eagles and Cardinals are good teams, but honestly, who would you rather play if you were forced to choose? OU would have chosen to face Gulf Coast and Louisville, respectively, in a heartbeat.

Can someone please explain why this guy still gets playing time? Fisher just got over a stretch of 19 straight missed shots over an eight-game stretch, while somehow managing double-digit minutes in each one of those games. From all accounts, Fisher is a tremendous leader that brings a sense of urgency and expectation to a locker room. But at this point in his career, shooting is the only thing he has left to offer, and it's debatable whether that alone should even warrant minutes. His lack of productivity is currently wasting about 13 minutes per game that someone like Reggie Jackson, Jeremy Lamb or Ronnie Brewer could be occupying.

OU junior forward Amath M'Baye announced this week that he will forego his senior season in Norman and enter his name into the NBA Draft. This came as a shock because M'Baye isn't projected to be selected in either the first or second round come June, but I'm not here to criticize this young man's decision. M'Baye is 23 years old, is scheduled to graduate in June and says he wants to take care of his family, which is certainly admirable. He is also from France, and one would assume that if the NBA doesn't work out, he would be just fine playing basketball overseas.

The reason this is "not so good" is related to OU coach Lon Kruger and his recruiting. Kruger already knew he was losing Romero Osby, Steven Pledger, Andrew Fitzgerald and Sam Grooms, while M'Baye was thought to be next year's go-to post-player. Now, the Sooners are left without any big guys and might have a hard time in the paint next season.