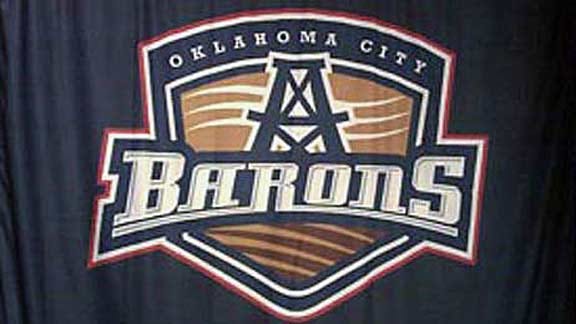 The Oklahoma City Barons clinched a spot in the 2013 Calder Cup playoffs with a 7-3 win over the Abbotsford Heat Saturday evening at the Cox Convention Center. The Barons (39-25-2-9) scored three power play goals in the middle frame en route to the regulation victory.

Oklahoma City pelted Abbotsford starting goaltender Leland Irving with 15 shots in the opening period, while the Barons' defense held the Heat to just five shots. Toni Rajala caught Irving off guard with a streaking shot from the right side but the netminder absorbed the shot to keep the game scoreless.

Oklahoma City's pesky defense played a factor in getting the Barons on the board at the 9:30 mark of the period. Colten Teubert took the puck away from the Heat that resulted in Tyler Pitlick a shot that Chris Vandevelde knocked down and put in the rebound to give Oklahoma City a 1-0 lead.

After taking the lead, Rajala hit the outside of the post and C.J. Stretch worked around the Abbotsford defense but couldn't get a shot off. Irving then made two saves on Josh Green, one of those shots coming on the backhand. The Barons continued to put pressure on Irving and Oklahoma City's defense turned away every attempt by the Heat to take the 1-0 lead into the locker room at the intermission.

The second period turned into the Jonathan Cheechoo show as the Barons tallied three power play goals in the frame to take a 4-1 lead into the locker room at the break. The Heat got seven shots on goal in the period, the majority coming early in the frame. Paul Byron got a partial break and Quintin Laing centered a pass for Carter Bancks on shots Barons goaltender Yann Danis was able to keep out of the net. Abbotsford's pressure paid off as Bancks tied the game at 7:11 after putting in a Mike Matczak shot.

Oklahoma City took control of the game following the equalizer. The Barons went on the first power play of the night as Steven Seigo went off for hooking Stretch. Oklahoma City got the go-ahead goal from Cheechoo who tipped in a shot from Mark Arcobello at 8:48 to put the Barons back up 2-1.

The Barons nearly had another goal, this time even-strength, as Darcy Hordichuk found Ben Eager for a one-timer in front of the net, but Irving made a great save. Danis stood tall as a half-board shot from Zach McKelvie found its way through.

Oklahoma City took advantage of a trio of late Abbotsford penalties to extend the lead. Cheechoo got his second of the night, a 5-on-3 goal at 19:30, as he rifled a shot past Irving to give the Barons a 3-1 lead. Stretch then banked in a steep angle shot from a difficult angle with just one second remaining in the period while Oklahoma City was still on a 5-on-3.

Oklahoma City added two goals in the third en route to the 6-3 win. Martin Marincin scored his seventh of the year with Hordichuk and Eager earning the assists on the Barons' fifth goal of the night at 6:01. The Heat got a goal back as Ben Walter scored at 9:38 but VandeVelde scored his second of the game at 10:25 of the period to make it 6-2.

The Heat just wouldn't go away as Krys Kolanos made it 6-3 at the 18:06. VandeVelde had a chance for a hat trick on a breakaway with less than 30 seconds remaining in the game, but Irving made the stop. Irving couldn't stop Pitlick who was there to put home the rebound and secure the 7-3 win for Oklahoma City.

Danis faced 12 shots in the period and turned away 22 total for the game as the Barons out-shot the Heat 37-24.

Oklahoma City closes out the 2013 regular season Sunday afternoon with a 4 p.m. start against the Houston Aeros.

Regardless of opponent, the best-of-five Western Conference quarterfinal series starts in Oklahoma City on  April 26 at 7 p.m. The best-of-five series is played in a 2-3 format, with the lower-seeded team hosting the first two games, while the higher-seeded team hosts Games 3 – 5. Oklahoma City hosts the second game on April 27 at 7 p.m. The remainder of the schedule will be announced once the Barons playoff opponent is confirmed.

Heading into the regular season finale tomorrow afternoon against Houston, the Barons can finish as high as the No. 5 seed and as low as the number No. 8 seed.

Tickets for Games 1 and 2 of the Western Conference Quarterfinals start at $11 and are on sale at 232-GOAL (4625) as well as all Ticketmaster outlets and online at ticketmaster.com.