Fear The Thunder: OKC Rolls Harden, Rockets In Game One 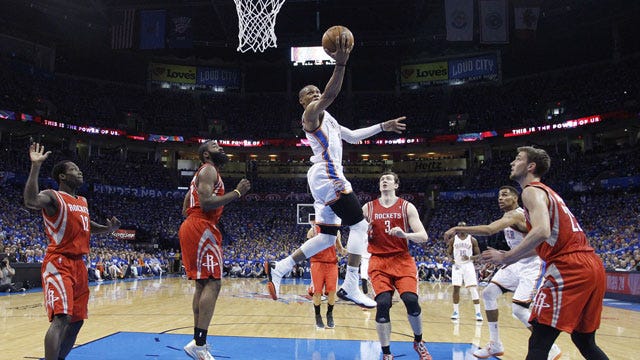 One down, three to go.

It took a little while to get the nerves worked out on Sunday night, but a late first-half run helped the Thunder find its stride en route to a 120-91 throttling of the Rockets in Game 1 at Chesapeake Energy Arena.

With the game knotted up at 40-all with five minutes remaining in the second quarter, OKC went on a quick 8-0 spurt that eventually swelled into a 20-7 run to end the opening half and put the Thunder up 60-47.

Oklahoma City never took its foot off the gas from there, leading the game by as much as 35 points and sending a happy crowd to the exits long before the final buzzer.

The Thunder dominated every facet of the game and looked like a team very much focused on making a return trip to the NBA Finals.

Former Thunder sixth man James Harden led the way for Houston with 20 points but he had a rough outing overall. Harden was just 6-of-17 from the floor and was booed heavily by the crowd on multiple occasions. In two games at The Peake this season, Harden is 9-of-35 shooting for 37 total points. That means he's shooting just 25.7 percent and averaging 18.5 points in OKC compared to 43.8 percent and 25.9 points per game everywhere else.

But it was far from just The Beard who failed to launch for the Rockets. OKC causes a lot of matchup issues for the Rockets and two in particular were glaring: Jeremy Lin vs. Russell Westbrook and Greg Smith vs. Serge Ibaka.

Westbrook went off for 19 points, 10 assists and eight rebounds as Lin proved once again to be incapable of guarding him. And things didn't go much better for Lin on the offensive end, as Russ pestered him into just four points on 1-for-7 shooting.

And as bad as that matchup was, the Smith vs. Ibaka show was equally advantageous for the Thunder. Ibaka was a force on both sides of the court, finishing with 17 points on 7-of-11 shooting with seven rebounds and three highlight-reel blocks. Meanwhile, Ibaka limited Smith to six points and three boards in a disastrous 17 minutes for the Houston forward. Smith finished as a minus-34 in his limited action.

Kevin Durant led all scorers with 24 points on 7-of-15 shooting and a perfect 9-for-9 from the foul line, while Kevin Martin scored 16 points on his former team.

Oklahoma City shot 53 percent for the game, while limiting the Rockets to 36 percent and just 22 percent from 3-point range.

Game 2 of the best-of-seven series is schedule for Wednesday at 6 p.m. at Chesapeake Energy Arena.

Fear The Thunder: OKC Rolls Harden, Rockets In Game One