Pine And Dandy: Bench Proves Thunder Not Finished Yet 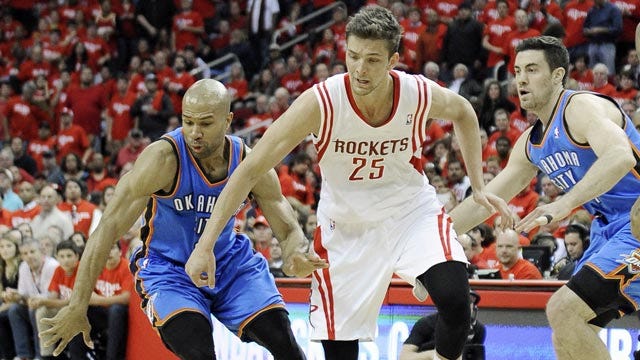 Kevin Martin and the Oklahoma City Thunder bench couldn't have played much worse in Game 5.

Martin personally went 1-for-10 from the field for three points, while Nick Collison played a mere seven minutes despite contributing six points, two blocks and two rebounds. It was a forgettable night all around.

Friday night couldn't have been more different for Martin and company.

Martin rebounded from an awful performance to score 25 points, 21 of those in first half. Collison scored 10 points and grabbed nine rebounds and Derek Fisher—all 38 years and 234 playoff games of him—scored 11 points, hitting three 3-pointers and played terrific defense on James Harden in the fourth quarter.

Those performances—combined with a 17-point, eight-assist, and seven-rebound game from Reggie Jackson—were instrumental in Oklahoma City finishing off the Houston Rockets Friday night, 103-94, to capture the series, 4-2.

Not only were those performances vital to Friday night's win, but they were exactly what Oklahoma City had been looking for ever since Russell Westbrook was lost for the season after Game 2. The Thunder had gotten decent contributions from each of those players individually at some point in the series, but never in collective fashion. The first occurrence couldn't have come at a better time.

Collison playing in the post worked wonders on both ends of the court for Oklahoma City. Thunder coach Scott Brooks finally saw the Rockets' plethora of guard-oriented lineups was no place for a big man like Kendrick Perkins. He played just four minutes in the first quarter and still managed to pick up a technical foul. During the time Perkins was on the court, the Rockets outscored the Thunder, 13-4.

The first half belonged to Martin. With Kevin Durant being hounded by Francisco Garcia, Martin—determined to prove himself after his atrocious performance Wednesday night—put the Thunder on his back, scoring 21 points in the first two quarters, including three 3-pointers.

After such an up-and-down series, it was refreshing for Thunder fans to see Martin finally come up with a big-time performance—against his former team, no less.

Jackson was terrific, as well, scoring 10 points in the first half to help OKC to a 58-54 lead at the break, despite Kevin Durant scoring just nine points in the half, only one of which came in the second quarter.

The second half was Fisher's time, specifically the fourth quarter. With the Rockets' defense continually collapsing around Durant, Fisher found himself wide open for two big-time 3-pointers, the second of which pushed the Thunder lead to 97-84 with 5:31 remaining. Perhaps more important than his offense was his defense on James Harden down the stretch. Fisher hounded The Beard in the fourth quarter, forcing him into bad shots or impossible situations where Harden had to pass out to his teammates.

Combined, Martin, Fisher and Collison were a plus-77 on the plus-minus scale. Needless to say, their play decided the game.

Not only was Friday's performance the key to Oklahoma City putting away the pesky Rockets, but it was a huge encouragement to any self-pronounced Thunder fan going forward to the next series against Memphis. Russell Westbrook is irreplaceable, but the Thunder proved they are capable of playing a style of basketball that will deflect attention away from Westbrook's absence.

A rough-and-tumble series with the Grizzlies awaits the Thunder beginning at high noon Sunday at The Peake, a completely different style of play from what OKC just experienced with Houston. However, what can't change is the level of contribution from those surrounding Durant.

Oklahoma City may not win a title this season, but Friday proved a deep run is possible with the right level of contribution from a couple key players.

Pine And Dandy: Bench Proves Thunder Not Finished Yet