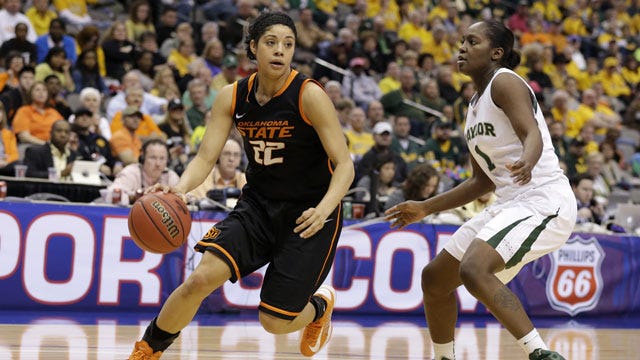 Oklahoma State rising sophomore Brittney Martin was one of 34 players to accept an invitation to participate in the 2013 USA Basketball U19 World ChampionshipTeam trials it was announced today by USA Basketball.

Trials to select the 12-member USA squad will be held May 16-19 at the U.S. Olympic TrainingCenter (USOTC) in Colorado Springs, Colo. Invitations to the trials were issued by the USA Basketball Junior National Team Committee.

"I am honored for this opportunity with USA Basketball and to have the chance to represent Oklahoma State. I look forward to the experience and getting to compete against some of the best players in the country," Martin said.

Martin started all 33 games during her freshman season for the Cowgirls, averaging 10.1 points and 6.2 rebounds per contest. She also averaged 2.7 assists and her 2.9 steals per game led the Big 12.

The Syracuse, Utah native was named to Full Court's Freshman All-America squad. Martin was also a unanimous pick on the Big 12's All-Freshman Team and was named the league's freshman of the week on five occasions.

She finished the year ranked in the top five among Big 12 freshmen in scoring, rebounding, blocked shots, assists and steals.

The USA squad,which is on a quest to capture a fifth-consecutive gold medal at the U19 Worlds, will compete in the 2013 FIBA U19 World Championship, hosted by Lithuania from July 18-28 in Klaipeda and PanevòÏys. The team will regroup for training on July 1 at the USOTC prior to traveling to Europe for the competition.