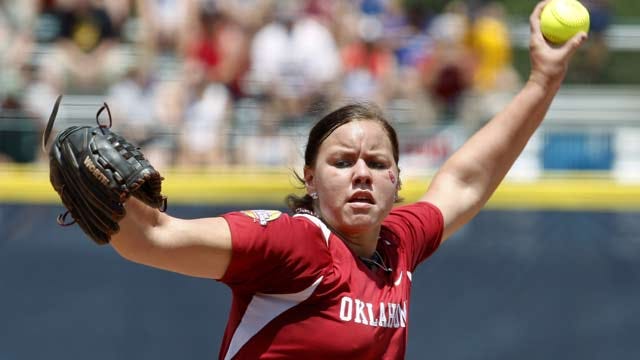 Keilani Ricketts began the 2013 season with a no-hitter, so it was only fitting for her to finish the year with another one.

Ricketts threw her fifth no-hitter of the season—the sixth of her career—to lead No. 1 Oklahoma to a 5-0 win over Oklahoma State, completing a sweep of the Cowgirls.

Ricketts was one batter away from pitching a perfect game, but hit Gessenia DeLaCruz with a pitch in the bottom of the third inning.

Lauren Chamberlain hit two two-run home runs to key the Sooners' offense, giving her 25 for the season. With 25 home runs this season, Chamberlain now owns the top-two home run totals in a single season in Big 12 history. Chamberlain also became the third player in Division I history to have two seasons of 25 or more home runs.

The Sooners and Cowgirls will learn their NCAA tournament fates Sunday evening when the NCAA announces the tournament bracket at 9 p.m.