OU Softball Not Looking Ahead As NCAA Tournament Begins 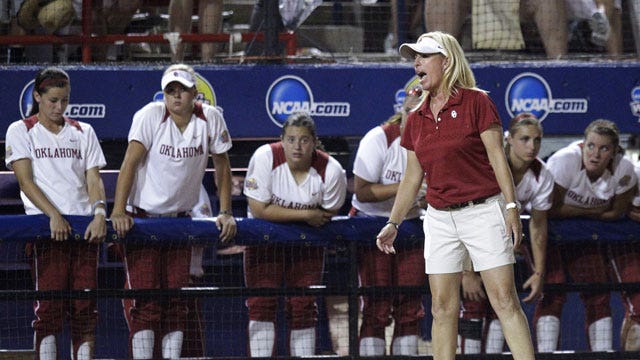 After the stinging disappointment of falling just short of a national championship last season, no one would have blamed the Oklahoma Sooners if focus had been a bit hard to come by during the regular season.

When you come so close to capturing your dream, nothing else matters except for getting back in position to try to capture it once again. Unfortunately for the Sooners, that meant playing through a 51-game schedule.

Now, that regular season is over and the Sooners are ready to begin their run through the postseason in hopes of capturing the program’s second national championship. The No. 1 seed in the NCAA tournament begins their run Friday night in Norman when the Sooners take on Marist at 7:30 p.m.

It would be easy for the Sooner to overlook this weekend, or even the Super Regional next weekend, but you won’t find that mindset anywhere near the Oklahoma clubhouse.

“I just think of how Arkansas was in the No. 1 team’s regional last year and they ended up taking a game from Cal (last season’s No. 1 seed),” OU pitcher Keilani Ricketts said. “We can’t look past our regional at all. We have to really take it one game at a time because that’s what we’ve done all season to be successful.”

OU first baseman Lauren Chamberlain put it even more simply, adding a sense of urgency in the process.

“Right now, it’s what we have to do,” Chamberlain said.

OU coach Patty Gasso echoed her players’ sentiments, saying her OU teams of the past have learned plenty of lessons about looking ahead in the NCAA tournament.

“We absolutely do not look forward besides what we have in front of us, which is Marist,” Gasso said. “When you look ahead is when you get burned. We are not that good that we can decide this is a cupcake regional for us because it absolutely is not. We have to work hard in everything we do.”

Not looking ahead is something the Sooners have become accustomed to this season, thanks to an extremely difficult schedule that helped OU rank No. 1 in RPI this season. The Sooners played 19 games against ranked opponents, winning 16 of them, good for second in the country.

“We’ve been doing it all year,” Gasso said on not looking ahead. “It’s not something unusual.

“These guys are pretty smart. Our program has been burned a few times in the past by thinking we had things locked up. They understand that, we’ve talked about it.”

Surprisingly, Gasso tried to downplay the Sooners’ role as the favorite to hoist the trophy in Oklahoma City in a few weeks. That’s almost funny, seeing as the Sooners rank in the top-10 of offensive and defensive categories 24 times as a team or as individuals. The biggest statistical example of Oklahoma’s dominance this season is the fact the Sooners have the best team ERA and runs per game average in the country.

Still, you can’t really fault her for trying.

“I don’t know that we even think we’re the team to beat,” Gasso said. “We talk about what we need to do to make ourselves better, but we don’t talk about our No. 1 seed, our No. 1 ranking. Are we confident? Yes. Are we excited to get into this? Absolutely. A No. 1 ranking is nice to promote our university and our program, but that’s about it.”

As for that ridiculously tough regular season schedule, Gasso said she didn’t build the schedule with the sole intent of forcing her team to focus on every game, but that certainly played a part in her thinking.

“Mostly it was to get to a place where we are right now, saying we have the toughest strength of schedule and we’ve done our jobs,” Gasso said. “If I don’t do that in February and March, we could be the No. 8 or 9 seed. This team’s too good to put them at risk of not having a strong enough schedule to be able to be in the position we are right now.”

Chamberlain said the schedule was daunting at first, but the team accepted the challenge and used it to their advantage, becoming a better team in the process. Gasso added the vigor and energy with which the team attacked rigorous task was one of the highlights of the season for her.

“It just kept coming at them and they loved the challenge,” Gasso said. “Even though their bodies were getting a little weary, they were getting ready for Washington, Kentucky and anybody that stepped on the field. I was very proud of what they did and the payoff is happening right now.”

That payoff is a home regional and a chance to host a super regional before travelling 30 minutes up the road to Oklahoma City for the Women’s College World Series. But the Sooners won’t talk about things that far down the road. The focus is on Friday night’s game and after that, they may just talk about Saturday.

OU Softball Not Looking Ahead As NCAA Tournament Begins