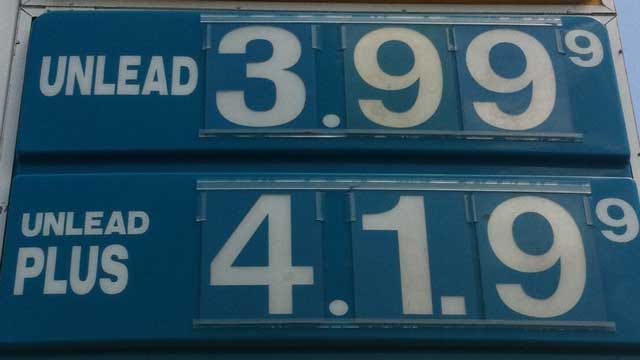 According to AAA Oklahoma's gas price tracking website, on Sunday, the average price in Oklahoma City for a gallon of self-serve regular gasoline is at its highest point ever, $3.963, breaking Saturday's price of $3.952, which was also a record high.

"The good news for the Oklahoma City motorist in all this, if there is any, is that it appears over the last eight hours, gas prices have dropped just a bit," said Chuck Mai, spokesman for AAA Oklahoma. "Whether this is a trend or just a blip is anybody's guess."

Oklahoma's statewide average continues to inch upward, now at $3.904. But the Tulsa average dropped three-tenths of a cent overnight to $3.846 Sunday morning.

"It appears at least part of the reason for these breathtaking price spikes is limited gas supplies caused by a couple of refineries in the upper Midwest going offline," said Mai. "But these shortages have only impacted selected locations. For example, the average price for regular gasoline in Texas today is $3.43, which is 47 cents below that of Oklahoma. And Arkansas' average today is 48 cents below Oklahoma's."