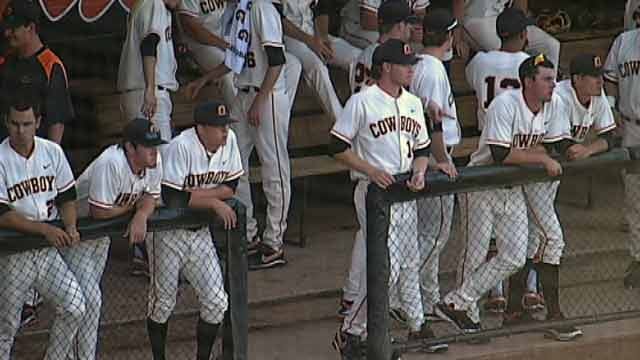 Oklahoma State was eliminated from title contention at the Big 12 Baseball Championship Friday night as Kansas handed the 12th-ranked Cowboys a 5-3 loss at the Chickasaw Bricktown Ballpark.

OSU's loss marked its third straight, its longest skid of the season and just the second time the Cowboys have lost three in a row in 2013, as they fell to 39-16 overall. OSU will conclude tournament play Saturday against West Virginia at 4 p.m.

KU (33-24) took an early 1-0 in its first at bat, plating an unearned run on an Alex DeLeon single in the bottom of the first.

That lead held until the fifth, when the game saw what would become a trend of the lead changing hands regularly.

In that inning, OSU tied the score on an RBI single by Randy McCurry, then two batters later, got a clutch two-out double from Zach Fish to put the Cowboys up, 2-1.

However, the lead didn't last long as KU picked up a run in the bottom of the frame when Tucker Tharp, who led off the inning with double and advanced to third on a bunt, scored on a wild pitch with two outs.

Tied at 2-2, OSU regained the lead in the sixth with another two-out RBI, this one a single off the bat of Walton.

But once again, the Cowboys failed to hold the lead.

In the seventh, Tharp delivered his first home run of the season, a one-out, solo shot to left-center field to tie the score at 3-3. After Justin Protacio reached on an error and Kevin Kuntz followed with a bunt single, the Jayhawks went back on top on Michael Suiter's RBI single.

OSU positioned itself to tie or regain the lead again in the eighth, getting back-to-back, two-out walks to Saulyer Saxon and Walton to bring leading hitter Tanner Krietemeier to the plate. But KU closer Jordan Piche' came out of the bullpen and struck Krietemeier out to end the threat.

After the Jayhawks added an insurance run off Kenton Bevacqua in the eighth, Randy McCurry reached on an error to open the ninth bringing the tying run to the plate. But Robbie Rea grounded into a double play, and Fish flied out to end the game.

Nurdin worked seven innings, allowing four runs – just two of them earned – on eight hits while striking out six but fell to 4-3 with the loss.

Frank Duncan was the winner in relief for KU, improving to 4-5, while Piche' picked up his Big 12-leading 11th save with 1.1 scoreless innings.