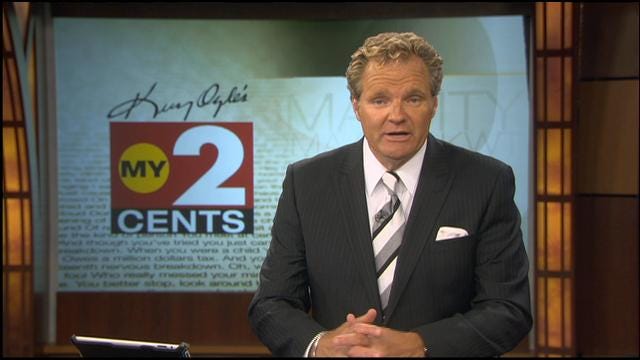 When I walked into the Weather Center last Friday morning, Meteorologist Nick Bender barely looked up from a computer he'd been studying, before solemnly saying to me "I don't like what I'm seeing."

Through the afternoon Friday, the warnings from the National Weather Service, to their great credit, became more urgent, saying "several intense tornadoes likely"and they became more insistent advising people against being out on the roads late in the afternoon.

I posted to Friends on Facebook and Twitter almost exactly what I texted to my own family, "plan NOW where you would take shelter this afternoon/evening if you had to."

One of the images that haunts me from Moore is a shot from SkyNews 9 of a long line of headlights crawling through the streets as that killer tornado roared toward them.

I was hopeful we wouldn't see that again Friday, people were given 2 to 3 hours to plan how they would take cover at their homes or to get somewhere safer.

But it was even worse, rush hour combined with dangerous storms led to gridlock, and frankly another media outlet urging residents who couldn't get underground to drive away, didn't help.

I understand the thinking, but that's a warning you can't give IN THE METRO when the tornado is 5 or 10 minutes away, too much traffic.

Even so, folks, when we have that kind of lead time, it's ultimately up to each of us to make a plan to stay safe. I suggest someone in each family take the lead on that.