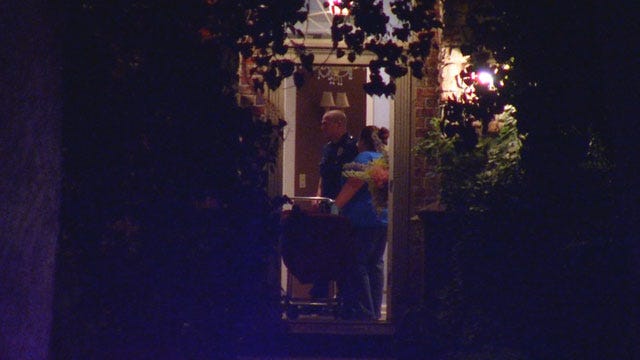 An Edmond neighborhood is on edge as police investigate a deadly home invasion that happened just before 4 a.m. Saturday.

Edmond Police got a call from a woman saying a man broke into her home on Cobblestone Road. Before officers could arrive, police learned shots had been fired.

"While officers were en route, the officers had been updated that the intruder had been shot by the homeowner," said Edmond Police Sgt. Chad Langley. "Upon the officers' arrival, they confirmed that a male subject had been shot inside the home and the investigation is ongoing."

Police say the homeowner shot and killed the intruder, 20-year-old Marlow Wilson Jr. It's a scene that shook up neighbors in the normally quiet complex.

"It's very scary. You just don't think about it happening in your neighborhood," said neighbor Shari Mason. "My mom heard the gunshots go off, so that's what woke us up...and then we got up and there were emergency vehicles everywhere."

Carolyn Simmons says she was startled on her last day in the neighborhood. She is moving because her husband got a new job, so she was up early packing when she heard all the commotion.

"There were some loud bangs. I thought it was a car accident," said Simmons. "This place is normally locked up, so I've never been, you know, worried about a break-in or anything because of the neighbors."

But this was just one of a string of home invasions this week. On Wednesday, burglars busted a back window to break in a home on Craig Blvd., just north of Danforth Rd. and Kelly Ave. where a 15-year-old home alone called police in a closet.

The same day, an alleged Wal-Mart thief broke into a woman's home near Danforth and Santa Fe and tried to bribe her to hide him from police. The suspects in both break-ins were caught and arrested. And like the others, Saturday's home invasion was also near Danforth Rd. but off of North Blvd.

Two children live in the Cobblestone home with their parents. Detectives were on scene throughout the day continuing their investigation.