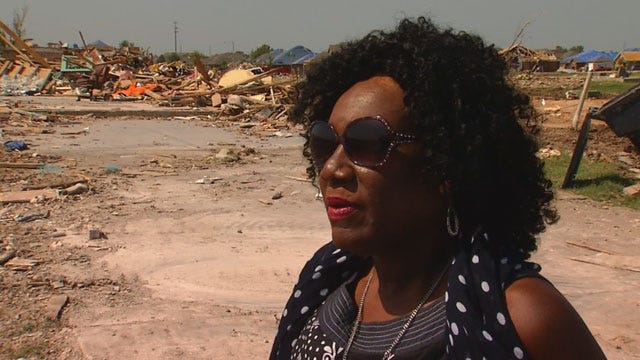 A woman who rode out the Moore tornado in a bathroom closet is speaking out about her struggles.

Evan Anderson interviewed Portia Trotter right after the tornado live on News 9. We checked in with Trotter who says today, she's just lucky to be alive.

"Our street is totally gone. I don't know where my car is," said Portia Trotter in a May 20 live report.

On the day of the Moore tornado, Trotter was out of breath and in shock. In our live interview, she still had on a black baseball helmet. She says it helped save her life as she lied in her closet during the storm.

"Luckily I had a hole that I could crawl out of, I was in my closet," said Trotter on May 20.

News 9 stopped her as she was walking in search of oxygen and water. She has Sarcoidosis, a disease which causes swelling in her lungs.

"I'm going over here to CVS to get oxygen. I need oxygen and it's hard to get," said Trotter, on May 20.

"I did not realize the devastation until I crawled out, because I had dialed 911. I had my phone on me, and I had dialed 911 and asked them to come get me out," said Portia today, standing on her homes foundation.

Portia was able to free herself from under a pile of debris, after her home of three years was flattened. She and her one-year-old Border Collie waited until she felt it was safe to try and get out.

Trotter says she's not sure at this point if she will rebuild in Moore. She says she's already received her insurance money, and has paid off her home.