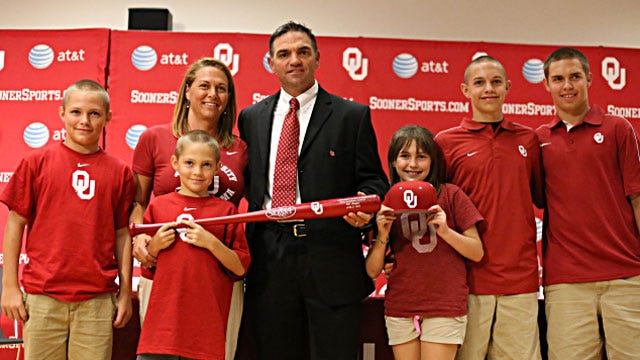 Pete Hughes stood in front of a room full of media and Oklahoma baseball players and made his first comments in Norman rather memorable.

"I know what some of you are thinking," Hughes quipped. "If you can't beat ‘em, join ‘em."

Less than a month after the Sooners eliminated his Virginia Tech Hokies from the NCAA tournament by winning the Blacksburg regional on the Hokies' home field, Hughes stepped up to the podium as the new head baseball coach of the Sooners.

Hughes was introduced by Oklahoma athletics director Joe Castiglione who spoke of the high interest in the open position and the many things that attracted the Sooners to Hughes.

"Pete is no stranger to facing the best competition in collegiate baseball," Castiglione said. "He's coming to us from easily one of the premier baseball conferences in America, the ACC."

Castiglione said Hughes is known as a tireless recruiter, something that will serve him well since he's spent the majority of his coaching career on the east coast.

"I'm excited to be a part of such a phenomenal college community," Hughes said. "There's nothing like coaching a baseball team with a rabid following that's emotionally invested in the same thing you are."

Hughes comes to Norman after a seven-year stint at Virginia Tech, where he led the Hokies to the NCAA tournament twice, including 2013 when Virginia Tech hosted a regional for the first time in school history.

"I left a very special situation," Hughes admitted. "I left it for two reasons. I don't think our family is going to miss a beat as far as growing up the right way because you can't not flourish in a college community as rabid and as tight-knit as this one. Two, I came here to play for championships and go to Omaha on a regular basis and bring a national championship to Oklahoma baseball."

While he may have left a special situation, Hughes has an excellent team coming back in 2014, including 2013 freshmen Craig Aikin, Anthony Hermelyn, Kolbey Carpenter and Jacob Evans.

"I know what I'm inheriting; I saw it with my own eyes," Hughes said. "I know I'm very appreciative of inheriting a Super Regional team. I realize you don't walk into those situations very often."

Hughes said he isn't worried about any recruiting issues that could come with having few connections in the area.

"This is the state university and it's in one of the most fertile baseball grounds in the country," Hughes said. "Oklahoma, bordering Texas; if we're going outside of that, something's wrong.

"I've been a stranger in a strange land twice. It's just a matter of getting out there and communicating with people, hustling and making yourself accessible; the network is made."

Former coach Sunny Golloway has not hired current OU assistant coaches Jack Giese and Aric Thomas to his Auburn staff yet, and Hughes said they will be heavily considered when he is putting together his coaching staff.

"I'm going to attract the top coaching staff I possibly can," Hughes said. "I will certainly pay attention to the staff I've inherited. Their track record speaks for themselves. There will be no stone unturned; it will be a process in which I will take my time and not rush into it."

There were mixed feelings with Golloway's departure, highlighted by former players blasting him on Twitter and celebrating a new era in Oklahoma baseball. Hughes said Thursday he planned to make alums a big part of the program, something Golloway failed to do according to many former Sooners.

"I'm anxiously anticipating meeting our alums and bringing them together," Hughes said. "Those are the guys, the Sooner family, that have built this tradition and I want them around us."