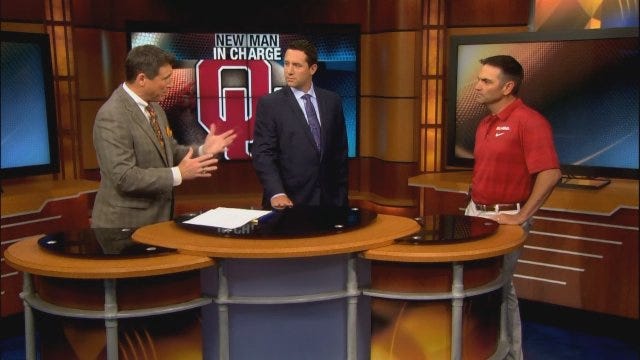 New OU baseball coach Pete Hughes joined us in studio Sunday night on The Blitz. The 45-year-old skipper proudly brought his Yankee accent and vigorous heart along for the ride—the new skipper having had successful surgery to overcome an artery he says was 99 percent blocked three weeks ago.

The husband and father of five takes over a program that saw success on the diamond under former coach Sunny Golloway. Episodes of unnecessary controversy occasionally popped up, resulting in mixed reviews when he announced he was headed to Auburn. Unexpectedly, Joe Castiglione needed a coach and headed to the plate looking for another home-run hire.

Time will tell whether the OU athletic director went yard with the hire of Hughes or if he'll go down swinging. I guess a single, double or triple are possible too, but Joe C has an all-star batting average when it comes to finding winners and taking it deep is both expected and needed. Hughes is an established recruiter, motivator and winner. The former Davidson College QB brings seems to be focused, energetic and driven to succeed which has translated into Hughes being warmly received by locals.

Take a listen, particularly to the end, when our discussion becomes one that is heart-to-heart.