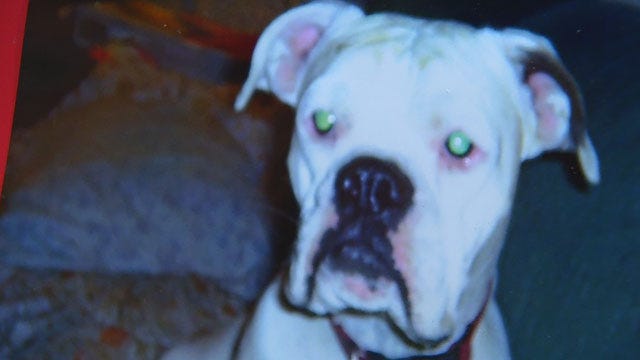 A family pet was shot to death by a police officer and the pet's owner is claiming that the officer was too quick to pull the trigger. Now her dog is gone and she is demanding justice.

North Enid Police were called to Stacey Long's neighborhood for reports of a dog at large. Long said when police arrived they shot and killed her dog in her own front yard.

"It was our baby, family member … we loved that dog," said Long.

Long buried her dog but not her anger over his death.

"For no reason to shoot him in his own yards seems cruel to me," she said.

Diego died one month ago and every day since then Stacey Long has replayed the scene in her mind.

"He could have called animal control and had them pick him up. That seems like the common sense thing to me."

According to a police report, Diego began aggressively barking at the North Enid Police Chief when he stepped out of his patrol car. The chief fired one shot, killing Diego.

Long says there have not been any complaints made against her dog and that her dog never been aggressive. She also says she is so confident her dog did not attack, she requested to see the dash cam video from the patrol car, but she says the request was denied.

"They refuse to give us information"

North Enid Police also refused to talk with News9 about the incident. The pet owner has now hired an attorney and plans to file a claim against the city.