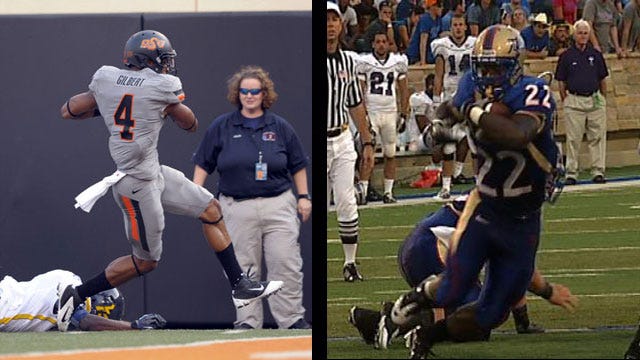 Oklahoma State cornerback/kick return man Justin Gilbert and Tulsa running back Trey Watts are on the preseason watch list for the Paul Hornung Award presented to the most versatile player in major college football, it was announced today by the Louisville Sports Commission.

The watch list was compiled by a panel of college football experts based on a combination of 2012 statistics, career performance and expectations heading into the 2013 season.

Gilbert owns the OSU record and is tied for the Big 12 record with five career kickoff returns for touchdowns – a figure that puts him second among all active players.

As a cornerback, Gilbert was the defensive MVP of the 2012 Tostitos Fiesta Bowl and earned second-team All-Big 12 honors as a sophomore in 2011. He enters 2013 with a streak of 26 consecutive starts. His 140 career tackles ranks third on the team.

Gilbert is a key figure for an Oklahoma State defense that ranks second nationally in turnovers forced since 2009 and is second in the Big 12 in fewest explosive plays allowed and fewest yards per play allowed since 2010.

In 2012, Watts led the Hurricane in rushing with 1,108 yards and three touchdowns. He has seven career 100-yard rushing games, five of which came during the 2012 campaign. Watts has also caught 58 passes for 757 yards, and totaled 586 kickoff return yards and 154 punt return yards.

Watts earned second team all-Conference USA honors as a kick returner and honorable mention accolades as a running back a year ago.

He was named the Game MVP and the Offensive MVP of the 2012 AutoZone Liberty Bowl in leading Tulsa to a 31-17 victory over Iowa State. Watts gained 249 all-purpose yards in that game, including a game-high 149 rushing yards.

The winner will be honored at the official Paul Hornung Award Banquet sponsored by KentuckyOne Health, held at the Galt House in downtown Louisville in late January 2014.