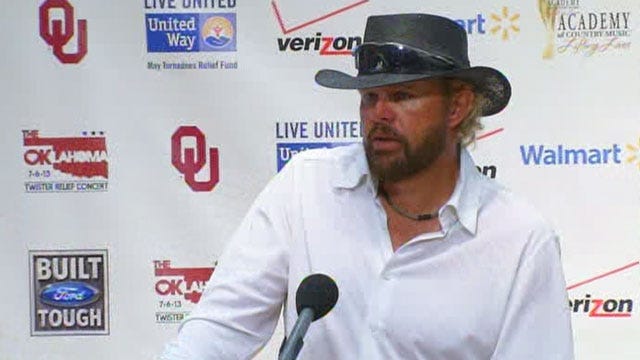 Despite the heat, Saturday's benefit concert was a sellout, with more than 65,000 people traveling far and wide to be in Norman to celebrate the Oklahoma resolve.

The list of entertainers was a "who's who" of country music superstars, all invited to perform by Moore native Toby Keith. Keith organized the event to give back to his tornado-ravaged hometown and other communities affected by this spring's devastation.

The star-studded concert took place at Memorial Stadium on the campus of the University of Oklahoma and kicked off with Keith's daughter, Krystal Keith, singing the national anthem. Several bands, including Opry veteran Mel Tillis and gang, performed before giving way to one of the most anticipated performances in almost two decades.

And from the way the crowd reacted, it was well worth the wait.

Oklahoman Garth Brooks, who retired from touring until his daughters are all out of high school, flew in between his Las Vegas stint to perform live in his home state for the first time since 1997. He strutted around on stage for about an hour and sang smash hits like "Friends in Low Places," "Papa Loved Mama," "The Thunder Rolls," "Callin' Baton Rouge" and "Two of a Kind, Workin' on a Full House." Brooks, who lives in Owasso, was joined by wife Trisha Yearwood for a duet on the ballad "In Another's Eyes."

Yearwood also performed a few of her own solo hits, and classic country stars like Willie Nelson and John Anderson brought down the house.

Many of the performers with Oklahoma ties wanted to give back to the areas hit hard by the deadly May tornadoes that swept through central Oklahoma leaving thousands homeless.

"People are still out there in tents, and then you can see the kind of hopelessness in the scenario to a lot of them," performer Ronnie Dunn said. "And I think by going out there, we were just kind of pushing through and letting them know that we're still thinking about and were still doing things."

The mayor of Moore, Glenn Lewis, was overwhelmed with the support.

"We just appreciate all the musicians so much and another shout out to my friend Toby and all of his band members they're the best," Lewis said.

Keith said he used to sell sodas in the stadium and was thankful so many came out to help his hometown of Moore.

"You don't get Garth [Brooks] and Willie [Nelson] and Sammy Hagar just to come in and offer it up for free if they don't want to help," Keith said. "We're here in this giant stadium and it sold out quick, and maybe we'll get to turn the corner today and start to rebuild."

Emergency responders said some were not prepared for the heat. According to emergency officials, 1,200 people at the concert showed symptoms of heat-related illness, and 21 had to be taken to the hospital.

The sweltering sun didn't keep the fans away from supporting tornado victims.

"You get in there and it's really loud, and you can feel the whole crowd," concert-goer Wyatt Carter said. "I just like how the artists come out and they respect the crowd and they feel like they're a part of the crowd and just come together for this great event for all the tornado victims. It's just really cool."

Attendee Pam Young said the sentiment as well as the eclectic group of people on stage made it a don't miss event.

"I like the mixture of everything," she said. "Barry Switzer, Bob Stoops, a lot of the singers were dedicated in coming here to be here for Oklahoma which is great. Wonderful to be here."