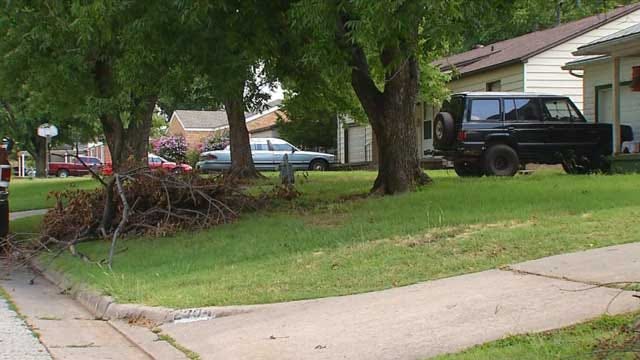 You may have noticed "Big Trash Day" has come and went in your Oklahoma City neighborhood but the big trash is still there. Some residents tell News 9 they have been waiting for a month for pick up.

Piles, and piles and piles of debris line the streets in Shirley Smith's Oklahoma City neighborhood. But it could be next week or later before someone comes to pick it up.

"They've been pretty good, but they're a little behind right now," said Smith.

Debbie Ragan with the OKC Utilities Department says after the May 31 storms, crews there were about four to five times the usual bulk waste, an unprecedented amount, and that put city crews behind.

"That volume of bulk waste and storm debris set up was just overwhelming to them," said Ragan.

So, on June 5, the city hired contract crews to help with the clean up but it still wasn't enough. So they hired more who will begin work on Monday.

"We know we're behind, we know you're frustrated, we hear your concerns," said Ragan.

The crews have already cleaned up about 7,500 tons of debris. That's about the same weight as 400 fully loaded city busses.

To get caught up, Ragan says crews will be working extended hours and on Saturdays.

Residents are asked to separate their storm debris into three piles and move it to the curb by Monday, July 22. Each pile will be collected by a separate crew. The three piles are:

Contractors have been working from west to east in Oklahoma City. A map showing progress will be updated every Tuesday and can be viewed at www.okc.gov.