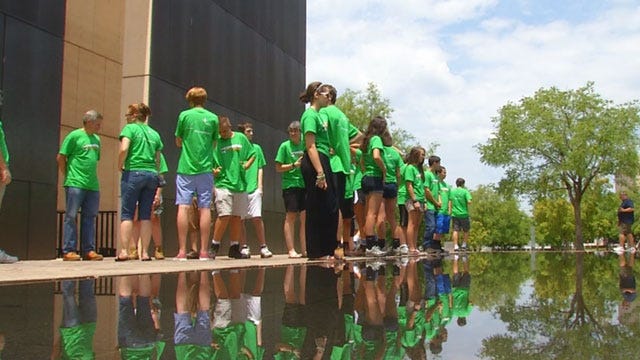 Teenagers who are no stranger to tragedy themselves are in Oklahoma this week as the recovery efforts continue from the May tornadoes.

"We think there is healing and helping to go both ways," said Rick Haylon, a chaperone for the group.

Haylon's group is from Newtown, Connecticut, a community that endured great tragedy on December 14, when gunman Adam Lanza opened fire inside Sandy Hook Elementary, killing 20 children and six teachers and staff members. Lanza killed his mother prior the shootings and then took his own life after.

"Kids are still struggling," said Haylon. "Some kids are still having nightmares, some aren't sleeping well, some grades dropped in the second semester and that's elementary all the way to high school students."

Before they started the week, the teens visited the Oklahoma City National Memorial and Museum. Reflecting on their own loss, they remembered the 168 people who died in the 1995 bombing of the Alfred P. Murrah Federal building. In fact, on the memorial wall outside of the museum a wreath hangs in honor of the Newtown shooting victims. Now, the teenagers hope to continue the healing process here in person.

"As much as this is to help the people of Oklahoma who lost their homes in the tornadoes, it's almost as much if not more to help us heal from our own tragedy," said Newtown incoming senior Jeff Haylon.

Through the Oklahoma Disaster Recovery Workcamp, the teenagers will visit tornado victims in Moore. While their focus will be on helping with debris removal, fencing, siding and roofing replacement, they also hope to create a lasting bond with the victims.

"We hope to form a connection that most of us will hopefully never forget and we hope to stay in touch with them," said Katie Clark, an incoming senior in Newtown.

The group will be here for one week, helping in the tornado recovery.

"The more we interact with each other within Newtown and outside of Newtown, the better off all the kids will be," said Rick Haylon.

The group is here through "Ben's Lighthouse," an outreach organization created to honor Ben Wheeler, a young student who died inside Sandy Hook Elementary.