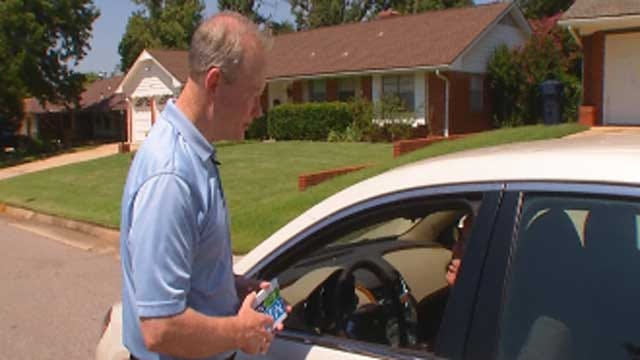 He will try to become the longest serving mayor in Oklahoma City history. Mayor Mick Cornett announced Monday he will seek re-election.

"I was a paperboy on this very street and I can tell you that this house took the morning and the Sunday and this one here they did not take the afternoon paper," Mayor Mick Cornett recalled as he walks through the Northwest Oklahoma City neighborhood where he grew up. "This neighborhood has never left me. The values that I have today are the same ones I got when I was walking these streets."

Monday, that's where he started his campaign for re-election.

"You never stop building a city, you never reach the destination you are seeking," Cornett said.

In his nine years as mayor, supporters say Mick Cornett helped the city blossom including bringing the OKC Thunder to town, and encouraging passage of MAPS3.

But the mayor says it's not all about that. Instead, he says the city has seen tremendous economic growth under his leadership and that means a greater quality of life for all.

"We are now taking care of the streets, adding police officers, getting firefighters the training they need and as a result the future generation is much more likely to stay in Oklahoma City then when I was growing up," he said.

City council member Ed Shadid has said he will run against the mayor. Shadid says he believes we need a mayor who is more fiscally responsible and who will not accept money from special interests.

Shadid says he also believes Oklahoma City needs a government where decision making is more inclusive of everyone. Shadid is planning a rally to announce his candidacy August 15. The election isn't until March 4.