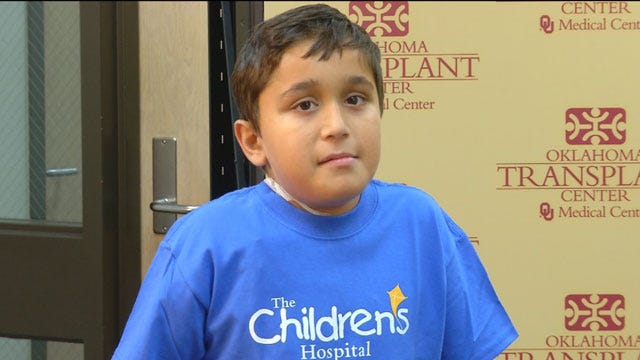 A Stillwater family is thankful Wednesday night after a successful transplant surgery for their son.

The odds of finding a perfect match are almost as tough as matching lottery ping pong balls. But when a little boy needed a new kidney, luck came his way, surprising doctors.

Doctors at OU Medical Center say this kidney donation is a one-in-a-million match. The little boy's mom was actually planning to donate her own kidney, but a surprise phone call from the doctor changed their plans in an unexpected way.

Jose Gomez, 10, is like most boys his age. He has a lot of energy and likes to run around with his brothers. But up until now, he's only had about 20 percent kidney function. It's made things tough growing up, and his mom, Janet, was ready to donate one of hers.

"I came in Friday to do some more testing for him just to be sure I was healthy enough to donate to him, and when I got the phone call from Dr. Turman, I was in awe," Janet Gomez said.

Janet's kidney would be spared after the hospital found a rare kidney match from another donor that would go to Jose.

"To have somebody in the common population and to have what is called ‘the perfect match,' so to speak, is a very, very rare occurrence," Dr. Puneet Sindhwani said.

"It took me by surprise. I was not expecting it by any means and to get that gift that matched so perfectly for my son, it was amazing," Gomez said.

Jose underwent a 3-hour transplant surgery over the weekend. Doctors say it went well, and when he woke up, everyone remembers Jose's first request.

"Once he got out of surgery, [he said] ‘I want chocolate ice cream and Dr. Pepper' and all those things he couldn't have. He's definitely been taking advantage of it," Gomez said.

Jose is taking strong anti-rejection medications, so he'll be homeschooled for the next few months to avoid getting sick. Today, he got to go home from the hospital.

Doctors say because this is such a perfect match Jose's new kidney should last up to 60 years.