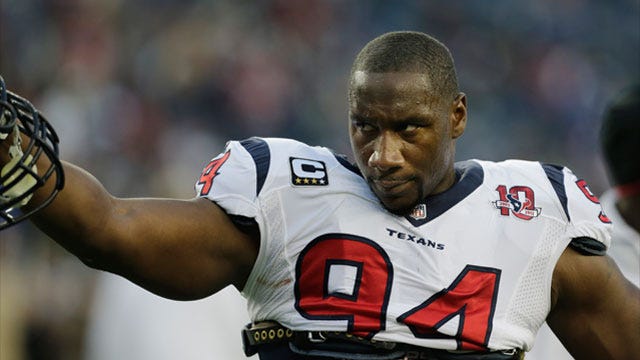 The NFL has suspended Houston Texans defensive end Antonio Smith three games (two pre-season, one regular-season) for ripping the helmet off Dolphins guard Richie Incognito and swinging it at him during a pre-season game last night. Smith was not penalized on the play, but will likely see a fine tacked on to his punishment.

There's bad blood between Smith and Incognito dating back to an incident last season in which Incognito fell on Smith's leg and began intentionally twisting his ankle. Smith retaliated by kicking the left guard repeatedly on the helmet and later received an $11,000 fine.

Smith was a popular player at Oklahoma State where he was All-Big 12 honorable mention in 2002 and 2003. He attended John Marshall high school in Oklahoma City and then went to Northeastern Oklahoma A&M junior college before signing with the Cowboys.

A fifth-round draft pick in 2004, Smith has blossomed in the NFL by totaling 252 tackles and 36.5 sacks in eight years as a regular rotation player (Smith only played in two games and didn't record a stat as a rookie). He set a career high in sacks with 7 last season starting opposite NFL Defensive Player of the Year JJ Watt.