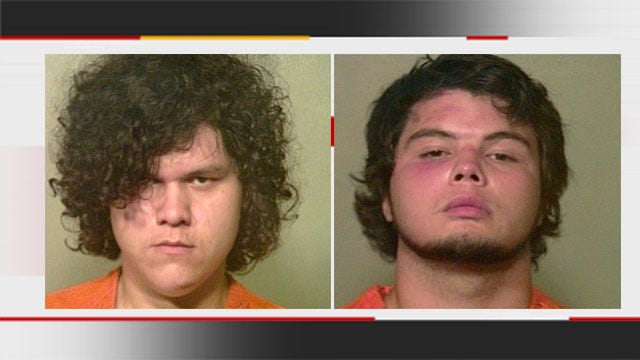 Two young men are behind bars after a 20-year-old was gunned down in a parking lot at a northwest Oklahoma City apartment complex Monday night.

The victim's family is speaking out. And so is the father of one of the suspects.

Right now, 21-year-old Christopher Marlow and Cory Foster are in the county jail accused of first degree murder, after a fight over money and a cell phone led to shots being fired.

George Larkin, 20, was killed in the shooting. Something both families are calling a senseless act of violence.

Jeremy Case still can't believe his baby brother George is gone. Now the family is left grieving a young man who would have been turning 21 in three weeks.

"He was just a massive gentle giant," said Case. "I loved him to death."

Case says his brother George went to go protect a friend Monday night, when he was shot and killed in the parking lot of the West Chase apartments near N.W. 23rd and Ann Arbor.

"He couldn't let his friends get hurt," Case said.

Case says his brother ran to tackle the two 21 year olds who came to fight his friend over a cell phone and money. That's when a gun was fired, and a bullet hit his brother's arm.

Jeremy says George bled out before an ambulance could get him to the hospital.

"I'm glad that no more than 3 hours before he died, I actually got to give him a big hug and tell him I love him," lamented Case. "A lot of people don't get that."

Police arrested Christopher Marlow and Cory Foster at their apartment in nearby Bethany. The two now stand accused of murdering Larkin.

Marlow's father now fears someone will hurt his other two children in retaliation. He did not want to show his face, but did share these words.

"Children nowadays listen to rap music, and think it's okay to carry guns and kill people," said Marlow. "And they provoke each other nonstop."

George's brother had this to say.

"I want no retaliation for this," said Case. "This is an accident! It started over beef, let it end. Let this be the end to this violence. Please let no retaliation comes from this."

Marlow was accused of assault with a deadly weapon back in 2009. The police report states he accidentally shot a teenage girl in the face while cleaning his father's gun.

A candle light service will be held at 10:30 p.m. at the apartments where Larkin passed away.