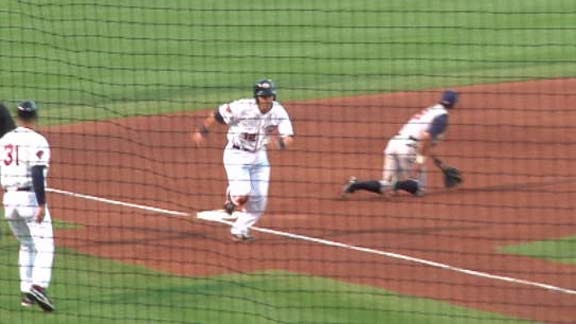 The Oklahoma City RedHawks used a three-run second inning and yet another strong effort on the mound to defeat the Round Rock Express, 4-2, before 7,007 at Dell Diamond Wednesday night.

The RedHawks (76-56) have now won seven straight games and own a seven-game lead atop the American Southern Division standings with 12 games left to play.

After having none on with two outs in the top of the second inning, the RedHawks rallied for three runs. Jimmy Paredes and Marc Kraus each drew walks, and Rene Garcia followed with an RBI single to start the scoring. Che-Hsuan Lin stepped up next and delivered a two-run single to extend the lead to 3-0.

The Express (69-63) got on the board in the bottom of the third. Leading off the inning, Zach Zaneski sent a high fly deep down the left field line. The ball stayed fair and resulted in Zaneski's first homer with the Express, cutting the lead to 3-1. It was the first homer the RedHawks pitching staff allowed in seven games.

With one out in the sixth inning, Paredes sent a deep fly ball to center field. Express outfielder Engel Beltre leapt at wall, but the ball was just out of his reach as Paredes notched his eighth home run of the season, making it a 4-1 game.

Just like the RedHawks did in the second inning, the Express were able to score after having none on and two out in the sixth. Joey Butler started the rally with a bloop double to right field, and two batters later, Chris McGuiness singled him home to pull the Express within 4-2.

The Express threatened in the eighth after having none one and two out. Butler doubled again, and Alex Buchholz followed with a walk. RedHawks pitcher Jose Cisnero fell behind in the count 3-1 to Chris McGuiness, but McGuiness cut through the next two pitches for a strikeout to end the inning.

Jorge De Leon worked a tidy ninth inning, retiring the side in order to notch his fourth save with the RedHawks.

Making his return to Triple-A, Ross Seaton gave the RedHawks a huge lift with solid start. Seaton (3-6) allowed two runs and seven hits over 5.2 quality innings. He struck out four and did not allow a walk.

As a whole, the RedHawks pitching staff struck out 10 Express hitters while walking just one.

The RedHawks and Express continue their series Thursday night at Dell Diamond at 7:05 p.