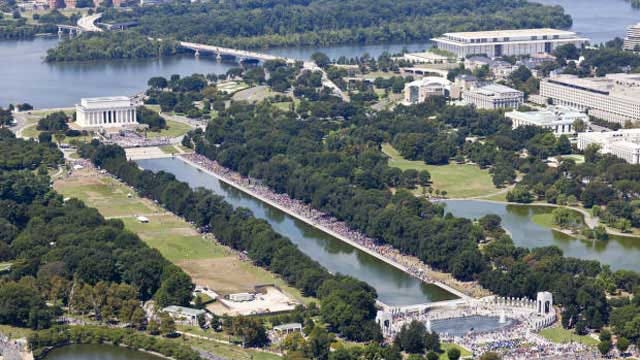 Tens of thousands of people gathered on the National Mall Saturday to commemorate the 50th anniversary of Dr. Martin Luther King Jr.'s 1963 March on Washington, listening as political and civil rights leaders reflected on the legacy of racial progress over the last half-century and urged Americans to press forward in pursuit of King's dream of equality.

The event, which was sponsored by the Rev. Al Sharpton's National Action Network, Martin Luther King III and the NAACP, featured a roster of speakers, including King, Sharpton, Attorney General Eric Holder, Newark Mayor Cory Booker and Rep. John Lewis, D-Ga. They spoke from the steps of the Lincoln Memorial, where 50 years ago this month King delivered his famous "I Have a Dream" speech.

Many of the speakers addressed race relations in optimistic terms, describing America's progress as encouraging but incomplete, but they also delved at times into more controversial fare like the Supreme Court's recent decision overturning parts of the 1965 Voting Rights Act and the shooting death of Trayvon Martin.

Martin Luther King III paid tribute to his father's legacy. "Five decades ago my father stood upon this hallowed spot" and "crystallized like never before the painful pilgrimage and aching aspirations of African-Americans yearning to breathe free."

King's message was not a "lament" or a "diatribe," his son said, but a call to action - and a reminder that the work always goes on.

"The task is not done, the journey is not complete," he said. "The vision preached by my father a half-century ago was that his four little children would no longer live in a nation where they would judged by the color of their skin but by the content of their character."

"However, sadly, the tears of Trayvon Martin's mother and father remind us that, far too frequently, the color of one's skin remains a license to profile, to arrest and to even murder with no regard for the content of one's character," he said, calling for "stand your ground" self-defense laws to be repealed in states where they have been enacted.

King also slammed the Supreme Court for having "eviscerated" voting rights protections, calling for citizens to "fight back boldly" to restore those rights.

Sharpton, looking back on the original marchers, said, "They came to Washington so we could come today, in a different time and a different place, and we owe them for what we have today."

Still, he added, "Today we face continuing challenges." Sharpton was especially outraged by the court ruling on voting rights and by the efforts of state legislatures around the country to erect new voting restrictions, such as voter identification laws. "Our vote was soaked in the blood of martyrs, and you can't take it from us," he said, promising to march in each state mulling voting restrictions.

Lewis, who was the youngest speaker at the original march, urged Saturday's audience to continue marching on behalf of equality. "Fifty years later, we cannot wait, we cannot be patient," he said. "We want our jobs and we want our freedom now ... we cannot give up. We cannot give out."

He reserved particular outrage for the recent high court decision on voting rights. "I gave a little blood on that bridge in Selma, Alabama, for that right to vote," he said, referencing the police brutality against civil rights demonstrators in Selma in 1965. "I am not going to stand by and let the Supreme Court take the right to vote away from us."

His message to Congress, which has mulled adjustments to voting laws in the wake of the court decision: "Fix the Voting Rights Act."

Booker, a Democrat and rising African-American political star who is seeking a Senate seat in New Jersey, noted that he was not alive during the original march, urging his younger generation to remember that their freedoms were "bought by the struggles and the sacrifices and the work of those who came before."

His generation can never pay back that contribution, Booker said, "but it is our moral obligation to pay it forward." He cautioned the audience against becoming "dumb, fat and happy, thinking that we have achieved freedom."

"There is still work to do," Booker said, naming gun violence, discrimination in the justice system and the continuing effects of poverty as issues in need of redress.

Holder, whose Justice Department has led the charge against voting restrictions in states across the country, emphasized the need to protect the rights of eligible citizens to vote "unencumbered by discriminatory or unneeded procedures, rules or practices."

Holder, the first African-American attorney general, credited the work of civil rights activists of the past 50 years with President Obama's election and his own ascension to the top of the Justice Department.

"Those who marched on Washington in 1963 had taken a long and difficult road," he said. "As we gather today, 50 years later, their march is now our march, and it must go on."

In today's America, Holder noted, the march for justice has broadened to include women, Latinos, Asian-Americans, members of the lesbian, gay, bisexual and transgender community and others.

Indeed, despite the abiding focus on race in America, several speakers managed to sneak in a plug on behalf of a variety of progressive causes. Women's reproductive rights, gay rights, climate change, public education, organized labor, gun violence, immigration reform, student loan debt forgiveness - all received an airing during the speeches, making the rally something of a clarion call for left-wing activism.

After the speakers concluded, the rally was scheduled march east from the Lincoln Memorial to the Martin Luther King Jr. Memorial, which was dedicated in 2011, becoming the first memorial on the National Mall dedicated to an individual who wasn't a former president. From there, the crowd was to proceed to the Washington Memorial before dispersing.

Despite the fanfare of Saturday's rally, which packed the mall from the Lincoln Memorial back to the World War II Memorial, it was only a prelude. The actual anniversary of the 1963 March on Washington will occur on Wednesday, and it will be marked by another rally on the mall, including a speech from Mr. Obama.

News On 6 1 Person Was Shot During Attempted Robbery, Police Searching For Suspects

News On 6 1 Person Was Shot During Attempted Robbery, Police Searching For Suspects

News On 6 Signature Symphony will be holding an outdoor concert at ONEOK Field Saturday night.