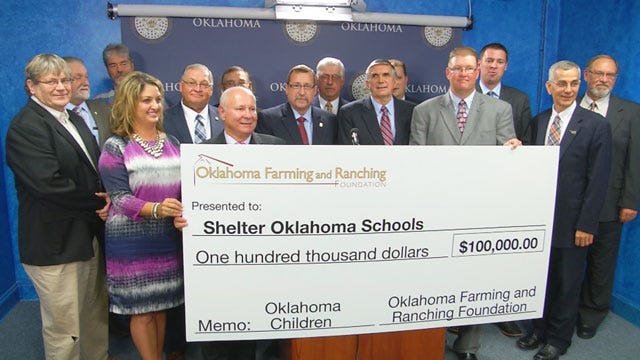 Donations continue to pour in from around the country to build storm shelters in Oklahoma schools. On Wednesday, the charity received a unique donation from farmers and ranchers across the country.

Approximately $100,000 was raised in less than two months on the charity's behalf. A small school district in Chickasha is already taking advantage of their portion of the money.

"My prayers have been answered," said Alton Rawlins.

Rawlins is the Superintendent of a small school district just a few miles northeast of Chickasha. He and his staff at Friend School got the news Wednesday morning that he would be presented with a $25,000 check to go towards a school storm shelter.

"This will really give us peace of mind having the security that we can get in a shelter quickly," said Rawlins.

In the event of major storm, Alton and about 230 students had to drive eight minutes down the road to take shelter at a local church. Now, it's going to take less than two minutes for everyone to safely get into a shelter on campus.

"It's just a small step in the grand scheme of things," said Jeramy Rich, President of the Oklahoma Farming and Ranching Foundation. "There's obviously a significant need state wide."

"We need the schools to come to us and say, here's our plan, and here's what we need to get over the hump," said Rep. Jon Echols, who helped form the charity.

Shelter Oklahoma Schools was formed three days after the Moore tornado, and since then has raised $2.2 million. The initial $500,000 will go to Moore public schools.

Meanwhile, Rawlins also says without help from the community, and his students who raised $25,000 last Friday, the reality of a shelter in six-months would have been put on hold a little longer.

Contractors at Friend School in Chickasha will break ground on a new shelter next Friday. It's expected be ready in March.

Shelter Oklahoma Schools is now in the process of finding three other schools to give $25,000 donations to. The $100,000 donation from the Oklahoma Farming and Ranching foundation was earmarked specifically for rural Oklahoma schools.