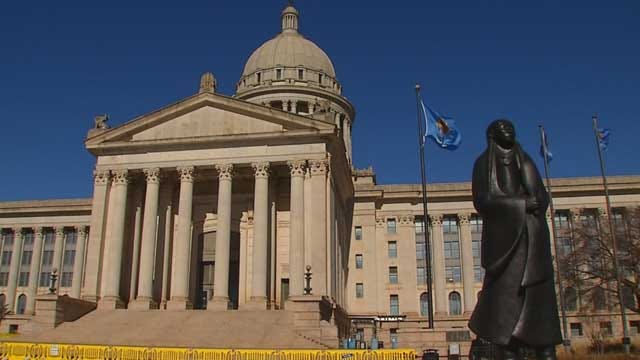 Child abuse and neglect started to decline in 2006. But something happened in 2011 which caused the numbers to increase.

And as the numbers climb and DHS is asking why.

"It's documented and it's a fact that Oklahoma has a problem with child abuse," said Alex Weintz of the Governor's office.

At the doors of the Governor's office, Valerie Wood-Harber put a spotlight on child abuse and neglect.

"My brother died of pneumonia on January 4 and that should not had happened," said Valerie Wood-Harber.

Specifically she feels DHS did not investigate her brother, Quinten's case, but DHS is investigating other cases across the state at an increasing rate.

"Trying to drill down why this is happening," said Sheree Powell with DHS.

In numbers released Wednesday to News 9, DHS has investigated just over 57,000 child abuse and neglect cases. More than a 45% spike from last year.

"The number of children in state custody are also increasing," said Powell.

While the number of substantiated child victims is now over 11,000 it's still shy of the all-time high which was set in 2006. But the state is looking for answers now before a new high is set.

"Efforts have been made as we go through this cycle to adjust laws and state statues," said Powell.

So, in hopes to stop this growing trend, DHS has turned to a nationally based advocacy group called Casey Family Programs.

"To see what's going on in those counties," said Powell.

And turn those answers to an education.

"If we can educate the public about what are the causes and how we can prevent it then we are going to keep children much safer," said Powell.

The Casey Family Programs' efforts are currently on-going. And DHS looks to have some information at the end of this month. As well as the full results by February.

The efforts of The Casey Family Program are free to the state.