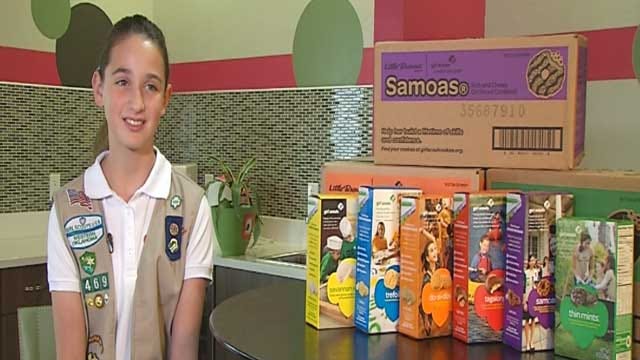 Sixth-grader Katie Francis sold more than 21,000 cookies and said she's not going to stop there.

When it comes to fundraisers, most kids just hope to sell any amount, but not Francis. She researched last year's record of 18,000 cookies sold and made it her goal to beat it.

"I definitely know that everyone who wants to can do it," Francis said.

For 59 days, the 12-year-old pulled her red cart filled with Girl Scout cookies throughout Oklahoma City.

Rain or shine, Katie made a plan to sell about 300 cookies a day and 30 boxes an hour.

"I just push through it, and I keep selling," Francis added.

Francis even sings songs to help her sale.

"On my honor, I will try to sell Girl Scout cookies day and night," Francis said.

Francis is so good, she sold two more boxes Monday, a week after the cookie sale ended. She beat the Girl Scout world record, selling the most cookies ever at 21,477 boxes.

Francis is getting recognition from her school, Hefner Middle, which has posted on its marquis: "Congratulations to our own Katie Francis for breaking the national cookie sales record."

She spent all of last week in New York City on several national media outlets, including Fox and Friends which aired Monday morning.

"I feel really, really happy about it," Francis said. "It's let me know that I've accomplished a lot, and it's really cool to see me on TV."

With all the boxes she's sold, she plans to make a cookbook of her favorite cookie recipes.

"You can put the Samoas in the microwave for five seconds and have them warm, and I also really like to dip the Trefoils in icing, ice cream, chocolate, Nutella and just about anything."

"We'll sell our cookies until they are gone, because there's many, many more where they came from."

A portion of all the boxes Francis sold will be sent to troops in the military and the Regional Food Bank of Oklahoma. A percentage of the profits will also help cancer research.

If you'd like to still buy Girl Scout cookies, you can do so at their Oklahoma City office at 6100 N. Robinson Ave.