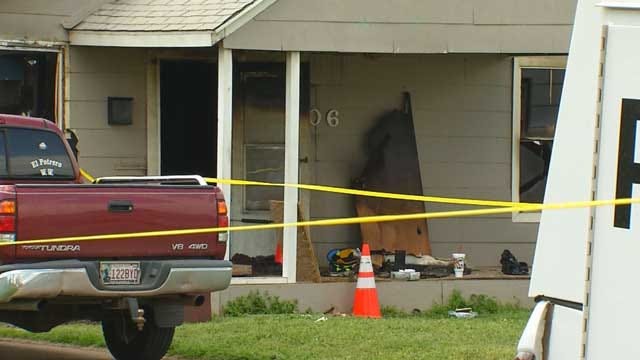 Oklahoma City police say the death of a man found inside his burning home on Sunday has been ruled a homicide.

But police are not releasing the man's name. The home on S.E. 34th Street where the fire happened has been boarded up. And a neighbor across the street says her boyfriend tried to save the man who lived inside.

"He said I banged and banged on the door," said Karan Pedersen. "And he couldn't get him to come to the door."

Pedersen says she and her boyfriend called 911 as soon as they saw the flames.

"He was on the couch right by the front door," said Pedersen. "There's no way anyone could have survived that fire, the smoke was billowing out."

Petersen says she is shocked to hear her neighbor's death is now being investigated as a homicide.

"Scary, it's really scary," said Petersen. "I don't know, he had lots of company there."

Pedersen says she didn't know her neighbor well, and only knew him as Charlie. She admits there had been a recent quarrel with Charlie and another neighbor just days before the fire.

"They were drinking and partying, so they could have just been having fun and being loud," said Petersen. "I don't know."

Oklahoma City police are asking anyone with information about this death to call the homicide tip line at 297-1200.