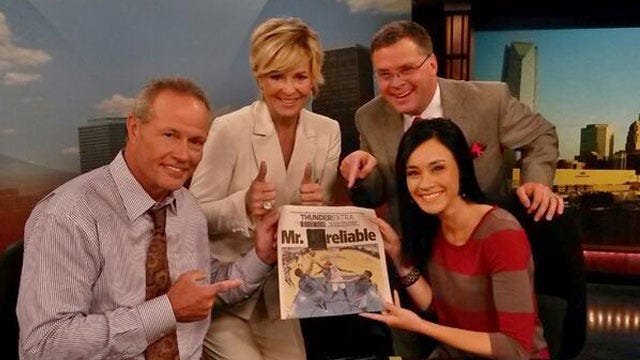 A headline in The Oklahoman sparked the ire of Thunder fans and drew national attention on Thursday morning. The headline "Mr. Unreliable" was poised over a picture of Kevin Durant getting blocked by a gang of Grizzlies on the front page of the Thunder Extra section.

"Me? Mr. Unreliable?" Durant asked during the Thunder shootaround today in Memphis. "I don't really care. That's what they're supposed to write. I didn't come through for the team so they've gotta write that type of stuff."

Russell Westbrook, naturally, defended his teammate. "That's BS in my eyes," Westbrook said. "Since he got into the league he's gotten better every year. One week ago you guys were calling him MVP and the next thing you call him unreliable. That doesn't make sense to me."

The Oklahoman later tweeted that the headline missed its mark and was "overstated and unduly harsh."

"The headline and presentation left the impression that we were commenting on Durant's season, career or even character. We were not. We were referring only to the Memphis series," The Oklahoman sports editor Mike Sherman clarified.