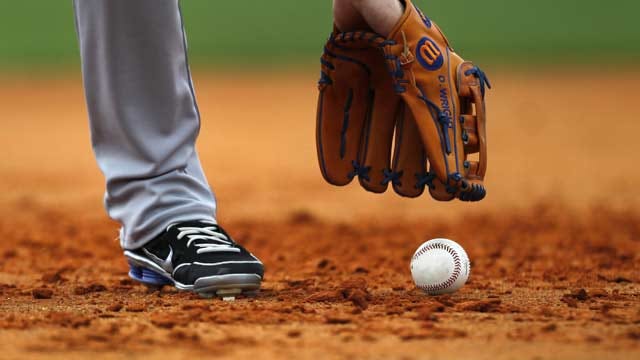 No. 9 Cowboys Keep Rolling Along

With the victory, coach Josh Holliday's ballclub improved to 33-13 on the season, which includes a 19-8 mark on their home field. It also marked the Cowboys' 19th come-from-behind win of the year.

Tanner Krietemeier led the OSU attack with a 3-for-3 night at the plate, while Tim Arakawa drove in two runs, his ninth multi-RBI game of the season, and is now tied for the team lead with 31 RBIs.

Alex Hackerott earned the win on the mound in relief of starter Jon Perrin to improve to 3-1, while Brendan McCurry added to his record saves total with his 13th of the year and 21st of his career.

The win helped the Cowboys avenge a loss to ASU on March 2 in Surprise, Ariz. In that game, Brett Lilek earned a save by striking out five in four innings, but on Friday, the Cowboys got the best of the southpaw as they recorded six runs in 2 2/3 innings to drop Lilek to 4-3 on the year.

OSU took the game's initial lead with a two-out rally in the second inning. Arakawa got things started with an RBI double down the right field line that scored Aaron Cornell, and Ryan Sluder followed with an RBI single to make it 2-0.

The lead did not last long, however.

In the top of the third, the Sun Devils (24-18) took advantage of two OSU errors and scored three runs on two hits. Christopher Beall plated the first run on a throwing error by Gage Green, and a two-out, two-RBI single by RJ Ybarra put ASU up, 3-2.

But the Cowboys would answer in a big way in the bottom of the inning and take a lead they would never surrender. After a pair of walks and a groundout, Krietemeier delivered a run-scoring double to tie it at 3-3. OSU then took advantage of two errors by shortstop Drew Stankiewicz, one when he mishandled a ground ball and another on an errant throw, to tack on three runs and take a 6-3 advantage.

Holliday's club extended its lead in each of the next two innings, getting a leadoff home run from Green in the fourth and a sacrifice fly by Arakawa in the fifth to extend the lead to 8-3.

ASU got back in it with two runs in the seventh and brought the tying run to the plate in the ninth before McCurry got Dalton Dinatale to fly out to end the game.

The two teams return to action Saturday at 3 p.m.

Sophomore second baseman Kolbey Carpenter drew a lead-off walk in the bottom of the third and was sacrificed into scoring position. Sophomore center fielder Craig Aikin brought him home with a groundball base hit up the middle for the first run of the night. Oklahoma added to its lead when freshman third baseman Sheldon Neuse lifted a triple to the gap in left-center to plate Aikin.

Baylor went to work in the fourth with a single, walk and sacrifice to put two men in scoring position with one out. Designated hitter Grayson Porter singled through the left side to cut the lead to one and third baseman Duncan Wendel tied the game with a sac-fly that scored right fielder Adam Toth.

Redshirt-sophomore lefty Adam Choplick pitched six-strong innings for the Sooners. He gave up two runs on four hits and two walks, while striking out six.

Choplick gave up two hits in the sixth inning, but escaped the inning without giving up a run. The Bears made two outs on the bases as Oklahoma picked up a pair of outfield assists. A mishandled ball at second following a single to center sent shortstop Brett Doe for third where he was thrown out, 8-6-3-5. With two outs, Porter doubled to right-center and OU right fielder Taylor Alspaugh slid to keep the ball from reaching the wall. He hit the cut-off and Menard was thrown out at home trying to score from first, 9-4-2.

Sophomore right-hander Corey Copping came on in relief for the seventh inning. He pitched a 1-2-3 frame with two strikeouts in the seventh. In the eighth, the Bears got the go-ahead run to third with two outs and the Sooners intentionally walked Toth to put runners on the corners. Catcher Matt Menard hit a one-hopper to short, which was fielded cleanly by senior Hector Lorenzana, but the throw to first was high and center fielder Logan Brown scored from third.

Right-hander Dillon Newman (4-3) earned the win in seven innings of work. He scattered six hits and four walks for two runs, while striking out three. Fellow righty Josh Michalec picked up his 17th save of the season in two clean innings.

For the game, Oklahoma outhit Baylor, 6-5. Game two of the series is Saturday afternoon at 2 p.m. Sophomore left-hander Jacob Evans will get the start for the Sooners.

CONWAY, Ark. – For the fourth time this season, and the second time in as many games, the Oral Roberts University baseball team fell in extra innings as Central Arkansas plated two late runs to defeat the Golden Eagles 2-1 in 10 innings.

ORU dropped back into ninth place as the Golden Eagle's record moved to 10-12 in the Southland Conference and 23-22 overall. The Bears improved to 23-19 overall and 11-11 in league play.

Tyler Boss was perfect at the plate with four hits and drove in the lone ORU run, improving his batting average to .369 this season. Emmanuel Forcier and Jose Trevino each had a pair of singles in the contest.

Bryce Biggerstaff (4-5) threw all 10 innings to earn the victory and struck out six Golden Eagles.

Chris Townsend had a hand in both UCA runs with the walk-off single and scored the tying run for the Bears. Townsend and Scott Zimerle each had two hits to lead the home team.

The Golden Eagles got on the board in the top of the third. Following back to back singles by Forcier and Logan Domenico, Boss sent a single through the left side to plate Forcier to make it a 1-0 game.

After struggling at the plate through the first eight innings, the Bears offense struck when it counted in the bottom of the ninth. With runners in scoring position and one out, Zimmerle singled through the left single to drive in Townsend from third.

Following a three-up, three-down inning for the Golden Eagles in the top of the 10th, the Bears put a pair of runners on in the home half of the inning, setting up an RBI single to left by Townsend to bring home Doug Votolato for the winning run.

ORU looks to even the series against the Bears on Saturday night as the two teams square off in game two at 7 p.m.