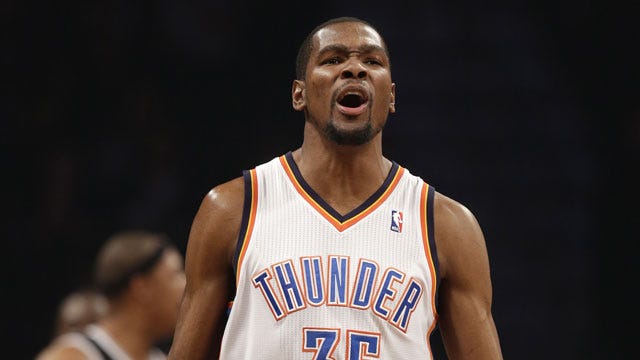 The reports have been circulating for days but now it's official: Kevin Durant is the NBA's Most Valuable Player for the 2013-14 season.

It marks the first MVP award for the five-time All-Star, ending a two-year run for Miami's LeBron James.

In a heartfelt ceremony Kevin Durant accepted the National Basketball Association's Most Valuable Player award.  During his speech Durant became very emotional while talking about his teammates, giving us a look behind the locker room door. He mentioned them all and talked about how each one of them has done something special to keep him motivated.

When Durant began talking about his family you could feel the love he had for them.  He talked about growing up and how it was hard, but his mother took care of him and his brother.  He finished by calling his mother the "real MVP".

But perhaps even more impressive than the numbers was that he guided Oklahoma City to the second-best record in the NBA despite a flurry of injuries hampering the team throughout the year, namely the absence of fellow All-Star Russell Westbrook for long stretches.

Even with all the added pressure on his shoulders and attention from defenses, Durant still managed to lead the league in player efficiency with a 29.8 PER.

Durant totaled 1,232 points, including 119 first-place votes, from a panel of 124 voters that consisted of sportswriters and broadcasters throughout the United States and Canada as well as an NBA.com MVP fan vote.

The Thunder lost Game 1 of its Western Conference semifinal matchup against the Clippers 122-105 on Monday night. Game 2 is scheduled for Wednesday at 8:30 at Chesapeake Energy Arena.

Watch the MVP Press Conference today at 3:30 p.m. on News 9 or live streamed on News9.com.