How The Thunder Will Overcome Loss Of Ibaka 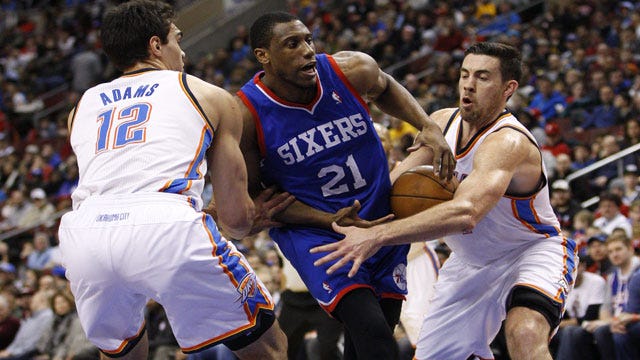 With Serge Ibaka out for the Western Conference semifinals, the Thunder has had less than a week to scramble for answers. Coach Scott Brooks must now dig deep into his bench and try to come up with a lineup solution that keeps Oklahoma City in championship contention.

"It's definitely a setback for us," Brooks said. "But we have a mentality here that's next man up. We definitely have enough to win this series. We have enough in our locker room to win."

The Thunder is officially losing 15 points, nine rebounds and a few blocks per game. But Ibaka's impact goes well beyond the box score. He's an intimidator.

Opponents are extra careful when driving into an Ibaka-patrolled paint. His shot-blocking skill forces players to put a little extra air under some of those layups and floaters. It causes other guys to not even attempt a shot, and in many cases, Ibaka prevents the opponent from even running a play that would result in a potential layup.

Just as there wasn't a replacement for Russell Westbrook after his injury last season, there isn't another Serge Ibaka on the roster – or the NBA for that matter. The Thunder's answer must come from a shift in strategy.

"We're just gonna have to figure it out," Westbrook explained.

Let's figure this out together. Here's a look at a few different lineup options the Thunder can utilize throughout each game in this series.

One way Brooks can go is to attack the Spurs' weak perimeter defense with two attack-first scoring guards. Tony Parker is a heck of a player, but he's got the same physical limitations that Chris Paul does. Specifically, he's weak he can't jump – a bad combo if you're trying to stop the hyper-explosive Westbrook.

In the two games he played against San Antonio this season once he returned from his second surgery, Westbrook averaged 29 points and seven assists on an incredible 23-42 shooting.

The Spurs have a tough enough time stopping him, but add Reggie Jackson to the mix and it becomes very difficult to keep OKC out of the paint. Jackson torched the Spurs this season, scoring 21.2 points on 68 percent shooting.

By going small with Westbrook and Jackson, Brooks can utilize either Thabo Sefolosha or Caron Butler at the 3, with Durant at the 4 and Kendrick Perkins at the 5. Durant would likely defend Tiago Splitter or Boris Diaw (KD is capable of defending either) while Perkins bangs on Tim Duncan.

This lineup would give San Antonio problems on the defensive end. Parker would defend Westbrook, while Danny Green (or another 2) would struggle to check the smaller and quicker Jackson. The Spurs would keep Kawhi Leonard on Durant and a not-as-mobile-as-he-used-to-be Duncan on Perkins, leaving Splitter to chase around the Thunder's shooter (Sefolosha or Butler).

By drawing Splitter to the 3-point line, it opens up the paint for Westbrook and Jackson to attack the rim with minimal help defense.

This lineup would be best utilized with Diaw on the Spurs' bench, as his mobility and versatility allows him to defend the perimeter better than Splitter.

Despite limited and inconsistent minutes, Perry Jones proved to be a versatile weapon for the Thunder this season. Jones can defend multiple positions, shoot, pass and handle the ball. His skill set is similar to Diaw's; just a more-raw and less-polished version.

With a lineup of Westbrook, Sefolosha, Durant, Jones and Perkins, the Thunder would once again be able to draw one of the Spurs' post defenders away from the basket.

Jones is 6-foot-11, so like Durant, can defend in the paint at least a little, but this would be an offensive move.

If Brooks elects to play Jones, Splitter or Diaw would undoubtedly draw the defensive assignment, and the Thunder could take serious advantage. PJ3 shot 16/38 (42 percent) on corner 3s this season. Spread Jones to the corner and make the Spurs' big choose between protecting the rim and closing out on Jones.

The easiest thing to do here is to start savvy veteran Nick Collison at the 4 and have done with it.

The downside to this is that the only big man you've got on the bench is Adams, who will likely end up playing more minutes than Perkins anyway. Brooks could still utilize Jones at some point as well.

Due to his vision, passing and mobility, the offense flows much better with Collison in the game. He played 17 minutes filling in for Ibaka in the second half of Game 6 in Los Angeles and helped OKC pour in 62 points in the half.

"That's what you need in playoff basketball is to be spaced and be able to see what's going on," Collison explained. "Because the teams take away what you're trying to do a lot of the times…and in order to be able to read it and make plays you have to have good spacing. Pace, space and decisions are what wins the game."

Collison has scored 375 points and grabbed 327 rebounds in 77 career postseason games. When called upon, he'll be ready for the moment.

Lineup 4) All Adams, all the time

With Ibaka gone, Steven Adams is unquestionably the Thunder's best-remaining rim protector. The rookie has a 7-foot-5 wingspan and a 33-inch vertical leap, and more importantly, has proven he knows how to utilize both in game situations.

The New Zealand native played a season-high 40 minutes in the Game 6 win in LA, recording 10 points and 11 rebounds and a game-high +17 +/-. He's huge, athletic, physical and unafraid.

"He's been great," Collison said of Adams. "When he got here you could tell he had the physical ability and a good idea of what to do, but as the season's gone on he's felt more comfortable and it's really impressive."

Adams recorded 4.16 blocks per 48 minutes, good for No. 4 in the NBA. To compare, Ibaka was 14th with 3.16 blocks/48 minutes. No matter whom else Brooks has in the game, Adams will probably need to average 40 minutes per game in this series if the Thunder wants San Antonio to fear the paint at all.

"It was hard, I felt like an old man afterward," Adams said of his 40 Game-6 minutes. "Got familiar with playing while I was fatigued, that was the main thing."

Adams will need to stay familiar with it.

Brooks won't start Adams alongside Perkins, but it won't take long for him to sub in. An Adams/Perkins frontcourt will likely appear periodically throughout the series.

The Thunder has a lot of options, and it may take a couple of games for Brooks to figure out which combination of players yields the best results.

The only thing that's set in stone is that the series begins Monday night in San Antonio, and the Thunder will have to be ready. OKC swept the season series with the Spurs, 4-0, and has won 10 of their past 12 meetings.

"We know that the games still go on and we still have to play, that's what we've learned," Collison emphasized. "We have to be ready with the guys we've got and we're confident we can play well."

News On 6 The future of Tulsa's city parks could look a lot different in the future.

News On 6 The future of Tulsa's city parks could look a lot different in the future.
View More Stories

News On 6 The future of Tulsa's city parks could look a lot different in the future.

News On 6 The Oklahoma Department of Corrections is suspending visitation again to all state-run facilities effective immediately due to COVID-19.