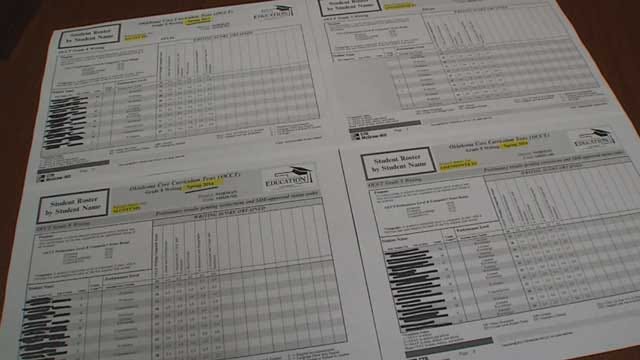 Schools are reporting more problems involving state testing. This time, schools across the state say they are having issues with the way 5th and 8th grade writing tests were graded.

Students spent months preparing for the tests, and taxpayers paid million to have them graded. But teachers and administrators say it's easy to see something doesn't add up.

Norman schools sent out a letter late last week requesting the State Department of Education ask the testing company to re-score all the tests.

"CTB did not do its job, it did not deliver accurate results to Oklahoma," said Shelly Hickman, spokesperson from Norman Public Schools.

She says when Norman schools received the test the red flags almost immediately went up.

"In the 8th grade 80% of our kids there was not a change in their sub-scores," said Hickman.

Students are supposed to be graded in separate categories and then each grade is weighted to get the final score.

Hickman says a closer look and they discovered students were also wrongfully penalized for plagiarism when they were actually citing evidence like they were taught to do. She pointed to an example from a student.

"She has quoted from the text and has indicated this is the resource material I got it from, this passage called Animal Helpers and she says it states and puts it in quotation marks and CTB is calling that plagiarism."

"There are a lot of discussions with CTB and CTB is looking at this situation now," said Oklahoma Department of Education Director of Communications Phil Bacharach.

Bacharach says at this point the Department of Education believes the scores are correct.

"It's unusual," he says. "As of right now we don't have reason to believe it's due to error."

Bacharach says they are being told the reason for the issues is a large volume of quoted material in the essays.

"If you remove the unoriginal content and don't use that, what you have left can often times be worthy of a 2 across the board or a 3 across the board," he said referring to the unusual sub-scores.

"When scoring the Oklahoma Spring 2014 OCCT Grades 5 and 8 writing assessments, we followed the processes and policies outlined by the Oklahoma State Department of Education (SDE) and are confident the exams were properly scored," said a company spokesperson in a statement.

CTB McGraw Hill is the same testing company that is responsible for the problems earlier this year and last year. Superintendent Barresi has said she will recommend the state not use them in the future.