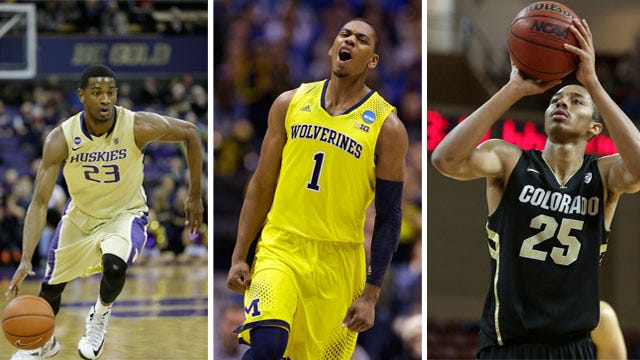 It's the most wonderful time of the offseason.

The NBA Draft is less than two weeks away, and the Thunder is poised to make a big splash.  Oklahoma City owns the No. 21 and No. 29 picks in this year's draft, and with a very deep pool of talent, it could be a franchise-altering night.

The Thunder could use a shooting guard and another big guy, but despite those being the most likely targets, OKC won't limit itself.  An additional point guard would also fit if the Thunder decides to move Reggie Jackson into the 2 slot.  There are also a few supremely talented small forwards in this group, and OKC could draft for value if one happens to slip.

To preview what the Thunder might do, we're counting down the top 25 best fits for Oklahoma City.  This list won't necessarily be the top 25 best players, but rather which guys specifically fit what OKC needs.  In addition, this list is realistic. If a guy has zero chance of slipping to the Thunder, they won't be on this list.

The profiles will look into each player's strengths, weaknesses, an NBA player comparison and why they would be a good fit for the Thunder.  Each profile will include two grades, one if OKC used their 21st pick on said player, and one if they used the 29th pick.  It's all about value.

The junior combo guard from Colorado can do a little bit of everything.  He's got NBA size at 6-foot-6 with a 6-foot-8 wingspan, can operate at either guard slot and actually enjoys passing.  He's long, shifty and enjoys attacking the basket.

His lack of athleticism hurts his draft stock.  Many scouts aren't sure how he'll perform against elite NBA athletes.  Dinwiddie also needs to improve his shooting.  He knocked down 34 percent from deep last season with the shorter college 3-point line, a mark he'll need to improve at the next level, especially with a lack of athleticism.

Dinwiddie would give the Thunder another guard option off the bench. With the departure of Derek Fisher and likely departure of Thabo Sefolosha, OKC is in need of another guard.  If he made the roster, Dinwiddie could provide depth if Scott Brooks elects to play Reggie Jackson heavy minutes alongside Russell Westbrook.

Wilcox played all four years at the University of Washington, a rarity nowadays.  He averaged 18 points and shot a solid 39 percent from 3-point range last season, while committing fewer than two turnovers per game.  There's nothing flashy about Wilcox, he's just a solid shooting guard who can come in and provide a team with a little bit of everything.  He can shoot, dribble, pass and get out in transition.

Despite being pretty good at everything, he's not great at anything.  In order for him to carve out his niche in the NBA, he'll need to focus in on one or two skills and make them elite.  Think about the Spurs' Danny Green.  He was let go by Cleveland, but focused on his 3-point shooting and defense, and now he's the starting 2 guard on the world champs.

His age and experience gives him a boost here. The Thunder needs NBA-ready guys who can provide depth as soon as next season.  With OKC's departing shooting guards, Wilcox would have a good shot to come in and make an impact.

Robinson is a true 3, measuring 6-foot-7 with a 6-10 wingspan. He's an athletic guy who has the potential to become a terrific defender.

Despite his terrific size, Robinson needs to find directions to the weight room. At 211 lbs, he's not strong enough to defend NBA small forwards.  In addition, his 32 percent mark from 3-point range won't cut it, either. Robinson also catches flack for lapses in focus and intensity.  He's got a higher ceiling than a lot of players, but there are serious doubts as to whether he'll ever get there.

Robinson wouldn't likely make an impact next season. It's doubtful that he'll provide more than Jeremy Lamb or Perry Jones can right away.  Picking Robinson would be an investment in the future.