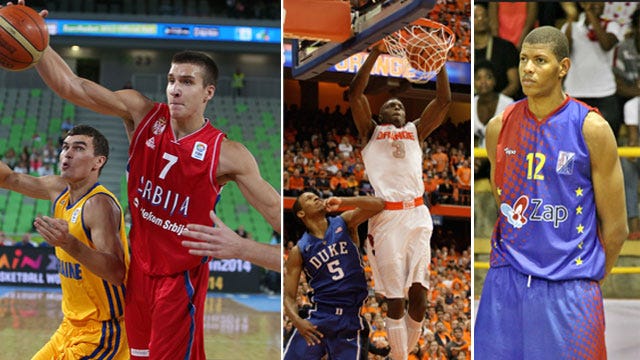 It's day No. 2 of the Thunder's NBA Draft countdown. To read about the countdown and about prospects 25-23, click the link below.

Excellent size for a true 2. He was also measured with a 36-inch vertical leap, an impressive number for a European prospect. Bogdanovic is a pure shooter who can space the floor and balance your offense. He shot 40 percent from downtown while playing in Europe last season at the age of just 21. He has size, he can shoot and he has upside. Good combo.

Some question his toughness, which in turn hurts his defense. Others criticize his shot selection, claiming he makes the ball stick too often. The rebuttal to this is that Bogdanovic was asked to do too much on his European club and if he joins an NBA team, his role will be more defined.

The Thunder needs a shooter and this guy fits the bill. The downside for a title-ready team like OKC is Bogdanovic's lack of experience and whether he's ready for the NBA grind.

Grant has excellent length and size for an NBA 3. 6-foot-8 with a 7-foot-3 wingspan allows him to do things many cannot. He's extremely athletic and can finish well at the rim. He's quick for his size and can defend multiple positions.

The main goal of basketball is to put the ball in the basket – that's where Grant struggles. He's a terrible shooter, who seemed to airball as many jumpers as he made. Despite his size, he only weighs 217 lbs, which is too light to defend NBA forwards. If he wants to play on the block, he'll have to gain significant weight. If he wants to play on the perimeter, he'll need to completely overhaul his jump shot.

He doesn't fit well, but he's a great athlete with a pretty high ceiling. If there's no one else left that OKC likes at 29, Grant would be a solid pick.

Tavares is huge, measuring in at 7-foot-3 with a 7-foot-9 wingspan. He doesn't have to jump to dunk the ball. You don't find many people like this.

He's not very polished. He never played basketball before 2010, so as you can imagine, he has a lot of things to improve on. It's highly doubtful that he can make an impact in the NBA next season.

He won't for a while, but Sam Presti likes projects and Tavares is exactly that. He has the physical tools to be a serious impact player in two or three seasons.