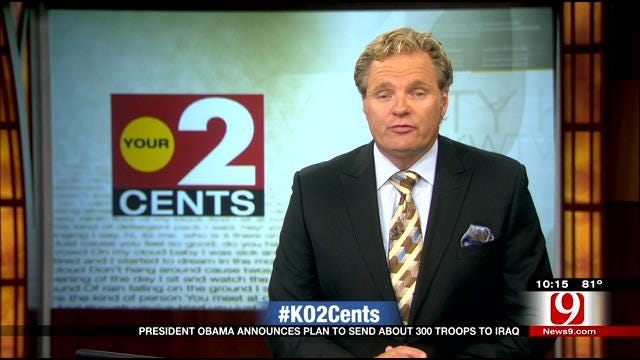 I think the U-S needs to conduct drone strikes and bombing to slow down the Islamic terrorists trying to overrun Iraq now that we've pulled out.

Here's what you had to say, Russell first: "It is not our job to police the world, let them kill themselves off."

Pamela in Mustang asks: "How many times do we go bail them out? How many of our sons have to die? Either go do it right, or stay out."

Cindi in Edmond: "I wish we would have had a better plan versus just pulling everyone out thinking things would be different."

From Cameron in Moore: "The people of Iraq need to want our help and they need to help themselves by resisting. We can't just force it upon them like we did last time."

John in Moore gets straight to the point: "No way! We should stay home!"

LaRay doesn't like that President Obama is sending 300 troops to protect out embassy in Baghdad: "Last week he was promising that we weren't sending ANY troops to Iraq. Should have known he was lying."

Gary says: "Crush them with air and sea power before we commit any troops to ground actions."

Finally from Anisa in Stillwater: "They made their choices, sadly, and threw away all that we did for them. So now, it's time for them to stand up and take care of themselves."