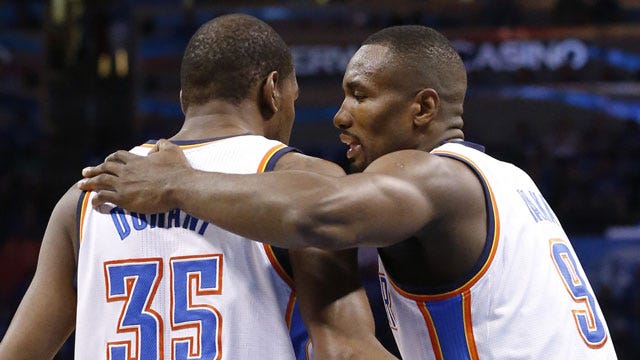 The summer of 2014 is arguably one of the most important periods of time for the Oklahoma City Thunder since the team became an NBA title contender in 2011. There are actual questions the Thunder needs to answer and holes that have to be filled on the roster. The NBA Draft is June 26 and the first step toward the improvement for OKC. How the Thunder uses this draft could go a long way toward determining the Thunder's chances at an NBA title in the years to come.

Here are five scenarios surrounding the NBA draft the Thunder could execute.

Scenario No. 1: Use both draft picks on NBA-ready players

This year's draft is very deep with wing players, exactly what the Thunder is looking for. Oklahoma City needs shooters that can spread the floor and allow Russell Westbrook, Kevin Durant and Reggie Jackson room to operate. This scenario is based on the Thunder looking to draft a shooting guard with the potential to crack the starting lineup, such as Michigan's Nik Stauskas, Michigan State's Gary Harris or UCLA's Zach LaVine. The Thunder also needs help inside off the bench, as Nick Collison isn't getting any younger and Perry Jones III doesn't have the ideal body type to bang inside. There aren't a lot of great options when it comes to power forward, especially at No. 29, which is likely where the Thunder would looking for a big guy. In an ideal situation, there will still be an option or two that will be able to contribute off the bench right away.

Scenario No. 2: Use both draft picks—one on NBA-ready player, one to stash in D-League or overseas

This scenario is very similar to scenario No. 1, with the difference being little to no expectations for the player taken with the No. 29 pick. There are some quality players after the first 20 or so are taken off the board, but if any of those has an immediate impact in the NBA, it would be a big surprise to just about everyone. Most of the players projected to go at No. 25 or later all have some work to do in order to be effective in the league. The Thunder already has several projects in the works. Internationally, they have Tibor Pleiss and Alex Abrines, while Andre Roberson and Grant Jerrett are works in progress in OKC. If the Thunder does indeed use both draft picks, it's likely the second of those would be a project to be groomed for the future.

Scenario No. 3: Use one draft pick; trade another for a starting shooting guard

The popular rumor has resurfaced once again. The Thunder and Knicks were in talks at last season's trade deadline to send the No. 29 pick to New York in exchange for Iman Shumpert. The Knicks seemingly wanted a bit more, but now, Oklahoma City has the No. 21 pick in hand. That could be enough for the Knicks. Having former Thunder player Derek Fisher as the head coach certainly won't hurt the Thunder's chances at acquiring Shumpert. If that deal doesn't work, there are plenty of other options out there, such as C.J. Miles and Anthony Morrow. It's likely the Thunder would use its other draft pick to go after a third point guard to take Fisher's place on the bench.

Scenario No. 4: Combine draft picks to move up in draft

Oklahoma City won't be able to move into the top-10 of the draft without giving up something major, such as one of its young assets. However, the No. 21 and No. 29 pick are fairly enticing, particularly the No. 21 pick. In a draft as deep as this year's, it's possible the 21st selection could have a big impact right off the bat. Plus, both picks would be on relatively cheap contracts compared to the talent they would bring to a team. If OKC wanted to move up in the draft to snag someone who otherwise wouldn't last until No. 21, they could easily package both draft picks to move up. Again, those picks probably wouldn't get them into the top 10, but it would probably be high enough to get their guy.

Scenario No. 5: Trade out of draft for veteran bench pieces

If we've learned anything about the Thunder over the years, it's that the organization does its due diligence when it comes to evaluating talent. The draft picks of James Harden and Serge Ibaka were highly scrutinized at the time, but in the present world, Sam Presti looks like a genius because of them. Even though this draft is loaded with talent, it's quite possible OKC has its eyes set on a select few, and if those few are gone, it could unload those two picks and use them to pick up veterans who are ready to play now. After all, we know how much Thunder coach Scott Brooks loves himself some veterans (see: Derek Fisher).