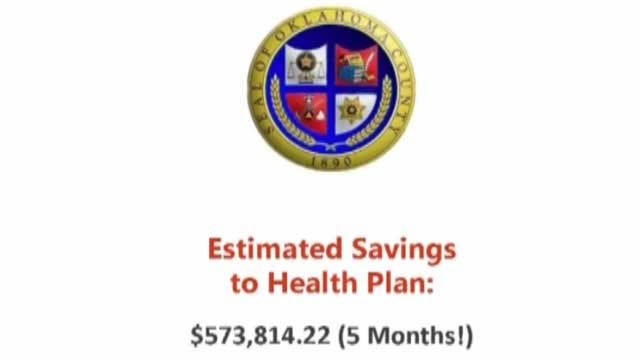 A switch in health care saves Oklahoma County hundreds of thousands of dollars and could be millions by the end of the year, but those on the other end of the switch claim there's more than meets the eye.

Charts show patients cost savings on a variety of surgeries. Each one with a difference of several thousands of dollars.

The reason? A switch to self-funded healthcare coverage.

Dr. Keith Smith makes sure, from first glance, you know his Surgery Center of Oklahoma loves the free market.

"It seems like every industry but health care has free market discipline has to endure," said Dr. Smith. "Competition is a healthy thing."

The competition is increasing. After a unanimous vote by county officials, Oklahoma County switched health care plans that would allow employees to use the Surgery Center, which posts surgery prices online. Since making the switch, the clerk's office has recorded a savings of over $573,000 in just five months.

Businesses are benefiting as well. The Kempton group has saved it's clients over $7 million in two years. Owner Jay Kempton feels that's not even the best part. Companies are now able to pay for the entire surgery.

"How can the employer save money, and the employees save all the money," said Kempton. "Everybody wins in the deal."

"It's creating less costly care, which is good for the consumer, but it's making the hospital setting even more costly, because what you're leaving the hospital with are sicker patients and more complex patients," President of the Oklahoma Hospital Association, Craig Jones, said.

Jones encourages hospitals to be transparent about pricing, but knows it's complex due to all of hospital care. If a hospital did want to compete with Dr. Smith in specific areas, losses could occur.

"It just means the costs will have to be made up some other place," Jones said.

"We're not putting anyone's back against the wall," said Dr. Smith. "We're just being honest in our pricing. It's the power of the market that has its own effect."

Those other costs that Jones implies are areas such as the emergency room and caring for uninsured patients.